HOUSTON — (October 13, 2016) — Unlike the temperature, single-family home sales throughout greater Houston cooled a bit in September, with a fractional 0.5 percent year-over-year decline. Homes priced between $150,000 and $500,000 saw positive sales volume while the marketâ€™s high and low ends experienced declines. Both median and average price reached record highs for a September.

According to the latest monthly report prepared by the Houston Association of REALTORS® (HAR), a total of 6,652 homes sold in September compared to 6,685 a year earlier. On a year-to-date basis, however, home sales are up 1.3 percent compared to this point in 2015. Inventory levels rose from a 3.5-months supply to 3.9 months.

"With home sales ahead of where they were at this time last year â€“ a record sales year â€“ in a market that continues to suffer energy-related job losses, I believe weâ€™re doing well,â€ said HAR Chairman Mario Arriaga with First Group. â€œInventory is still moving in the right direction, and consumers that were not buying homes in September accounted for strong rental activity throughout the month."

The single-family home median priceâ€”the figure at which half of the homes sold for more and half sold for lessâ€”rose 4.8 percent to $219,990. That is the highest median price ever for a September. The average price increased 2.4 percent to $277,849, which is also a September high.

September sales of all property types in Houston totaled 7,893, down 1.6 percent from the same month last year. Total dollar volume for properties sold in September was unchanged at $2.1 billion.

Month-end pending sales for single-family homes totaled 6,501, an increase of 10.5 percent compared to last year. Total active listings, or the total number of available properties, at the end of September rose 11.6 percent from September 2015 to 37,955.

Single-family homes inventory edged up from a 3.5-months supply to 3.9 months. For perspective, housing inventory across the U.S. currently stands at a 4.6-months supply, according to the latest report from the National Association of Realtors (NAR). 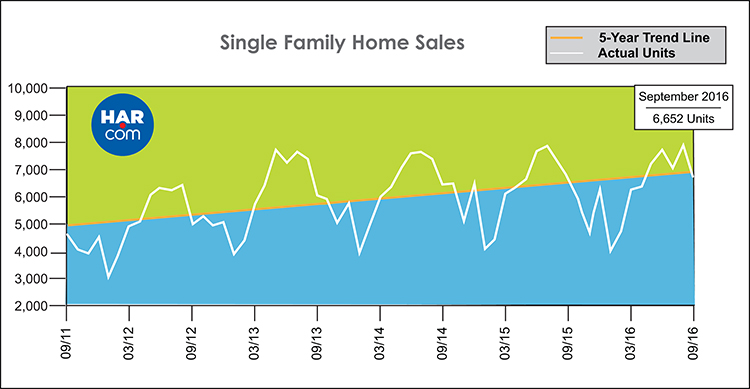 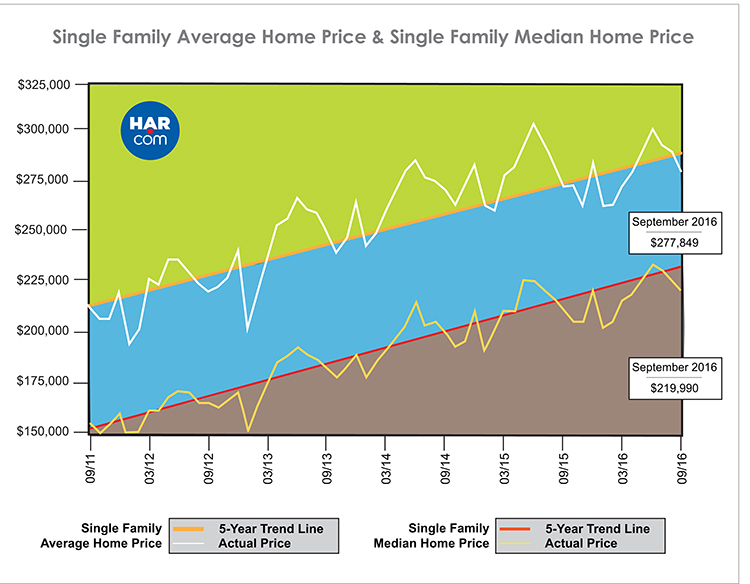 HAR also breaks out the sales figures for existing single-family homes. Existing home sales totaled 5,625 in September, down a fractional 0.4 percent versus the same month last year. The average sales price rose 5.2 percent to $262,868 while the median sales price increased 7.3 percent to $205,000.

Houston Real Estate Highlights in September
The computerized Multiple Listing Service of the Houston Association of REALTORS® includes residential properties and new homes listed by 32,000 REALTORSÂ® throughout Harris, Fort Bend and Montgomery counties, as well as parts of Brazoria, Galveston, Waller and Wharton counties. Residential home sales statistics as well as listing information for more than 50,000 properties may be found on the Internet at https://www.har.com.