Average and median prices remain the silver lining in the monthly housing market report, reaching the highest levels for an October in Houston


HOUSTON — (November 16, 2010) — The Houston real estate market staged an encore of its post-tax credit performance in October with a decline in sales volume but continued stability in pricing. Despite the fourth month of down sales, the market enjoyed another boost in the average price and a nudge in the median price of single-family homes.

According to the latest monthly data compiled by the Houston Association of REALTORS® (HAR), October sales of single-family homes throughout the Houston market fell 23.3 percent compared to October 2009. However, on a year-to-date basis, single-family home sales are off 4.0 percent from 2009 levels. Declines were recorded in all but the lowest pricing segment.

Foreclosure property sales reported in the Multiple Listing Service (MLS) declined 13.4 percent in October compared to one year earlier. Foreclosures comprised 21.9 percent of all property sales in October—unchanged from the month before and generally consistent with the levels they have maintained for much of the year. The median price of October foreclosures dropped 8.5 percent to $80,550 on a year-over-year basis.

Sales of all property types in Houston for October totaled 4,404, down 23.8 percent compared to October 2009. Total dollar volume for properties sold during the month was $873 million versus $1.0 billion one year earlier, representing a 20.3 percent drop.

"For four months running, Houston has experienced declining home sales, but the silver lining has consistently been the appreciation in pricing," said Margie Dorrance, HAR chair and principal at Keller Williams Realty Metropolitan. "We are encouraged to hear that more people are moving to Texas than any other state in the country—as many as 1,200 to 1,400 every month—and with Houston among the more popular urban destinations, local REALTORS® are hopeful that this will translate into improved sales going into the new year."

The month of October brought Houston's overall housing market predominantly negative results when all listing categories are compared to October of 2009. Total property sales and total dollar volume fell on a year-over-year basis while the average single-family home sales price rose and the median price ticked up fractionally.

Month-end pending sales for October totaled 2,821, down 23.2 percent from last year, signaling the likelihood of another month of slower sales when the November figures are tallied. The number of available properties, or active listings, at the end of October rose 16.8 percent from October 2009 to 53,039. The increase in available inventory coupled with declining sales volume pushed the inventory of single-family homes for October to 7.7 months compared to 6.1 months one year earlier. This figure still remains healthier than the national inventory of single-family homes of 10.7 months, reported by the National Association of REALTORS® (NAR).

October sales of single-family homes in Houston totaled 3,739, down 23.3 percent from October 2009. This marks the fourth monthly decline in sales volume after four consecutive months of accelerated sales activity that was primarily attributed to the tax credit. 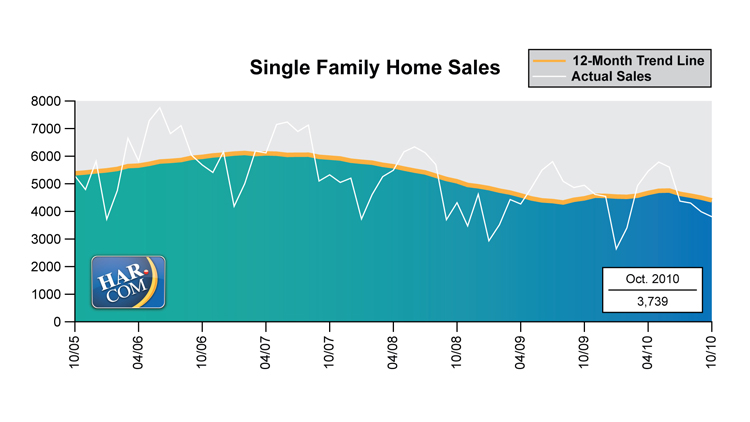 The average price of single-family homes in October was $208,459, up 5.6 percent compared to one year earlier. That's the highest level recorded for an October in Houston. At $150,000, the median sales price for single-family homes edged up 0.7 percent versus October 2009, achieving its highest level for an October in Houston. The national single-family median price reported by NAR is $172,600, illustrating the continued higher value and lower cost of living that consumers enjoy in the Houston market. 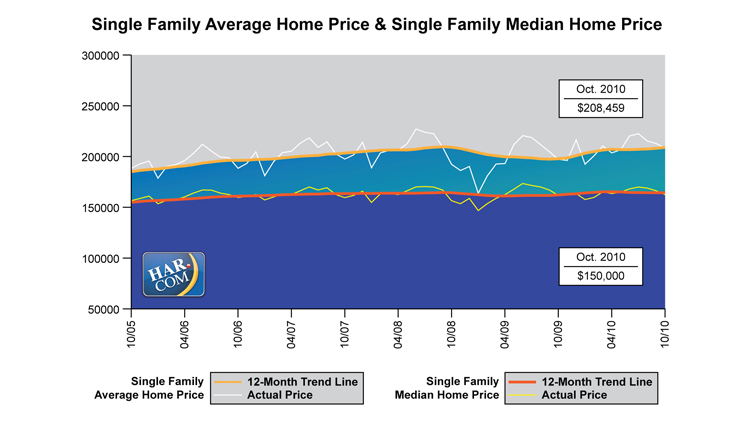 HAR also breaks out the sales performance of existing single-family homes throughout the Houston market. In October 2010, existing home sales totaled 3,161, a 21.5 percent decline from October 2009. The average sales price climbed 7.8 percent to $197,180 compared to last year while the median sales price of $139,900 was flat.

The number of townhouses and condominiums that sold in October fell 42.7 percent compared to one year earlier. In the greater Houston area, 299 units were sold last month versus 522 properties in October 2009. 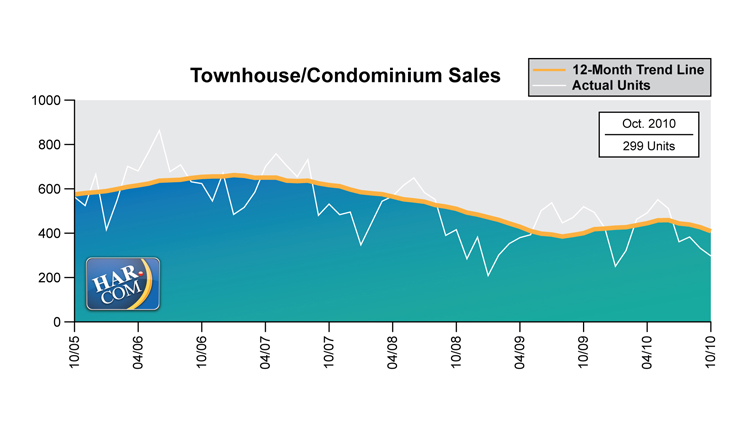 The computerized Multiple Listing Service of the Houston Association of REALTORS® includes residential properties and new homes listed by 26,000 REALTORS® throughout Harris, Fort Bend and Montgomery counties, as well as parts of Brazoria, Galveston, Waller and Wharton counties. Residential home sales statistics as well as listing information for more than 50,000 properties may be found on the Internet at https://www.har.com.

Founded in 1918, the Houston Association of REALTORS® (HAR) is a 26,000-member organization of real estate professionals engaged in every aspect of the industry, including residential and commercial sales and leasing, appraisal, property management and counseling. It is the largest individual membership trade association in Houston as well as the second largest local association/board of REALTORS® in the United States.