HOUSTON — (April 8, 2015) — After February’s decline in sales volume, Houston home sales returned to positive territory in March, with consumers buying newly listed homes before they ever had a chance to replenish the local housing supply. Sales of single-family homes rose 3.8 percent year-over-year in March, with most activity taking place among homes priced between $250,000 and $500,000. The high end of the market also had a gain after experiencing its first decline in many months in February.

March single-family home sales totaled 6,232 units compared to 6,005 a year earlier, according to the latest monthly report prepared by the Houston Association of Realtors (HAR). Buyer demand offset a 7.3 percent increase in new listings, keeping inventory levels down. Months of inventory, the estimated time it would take to deplete the current active housing inventory based on the previous 12 months of sales, increased only fractionally to a 2.8-months supply. That remains well below the current national supply of 4.6 months of inventory.

Home prices achieved record highs for a March. The average price of a single-family home rose 6.5 percent year-over-year to $276,837. The median price—the figure at which half the homes sold for more and half for less—jumped 8.9 percent to $208,000.

“It was great to have sales back in the black in March after February’s decline, but in order to satisfy the long-term needs of the Houston housing market, we need to see substantive growth in inventory levels, which remain at record lows,” said HAR Chair Nancy Furst with Berkshire Hathaway HomeServices Anderson Properties. “It could take the remainder of this year to begin approaching what we consider a ‘balanced market,’ which is typically a five- to six-month supply of homes."

The Houston housing market grew in all categories in March, with single-family home sales, total property sales, total dollar volume and pricing all up compared to March 2014.

Month-end pending sales for all property types totaled 6,004, a 30.6 percent increase versus one year earlier. Active listings, or the number of available properties, at the end of March rose 1.5 percent to 28,507. New listings totaled 9,389, an increase of 7.3 percent. However, the pace of home buying prevented those new listings from replenishing inventory levels.

Houston’s housing inventory grew only slightly in March to a 2.8-months supply versus the 2.6-months supply of a year earlier. According to the National Association of Realtors, the current supply of homes nationally stands at a more robust 4.6-months supply. 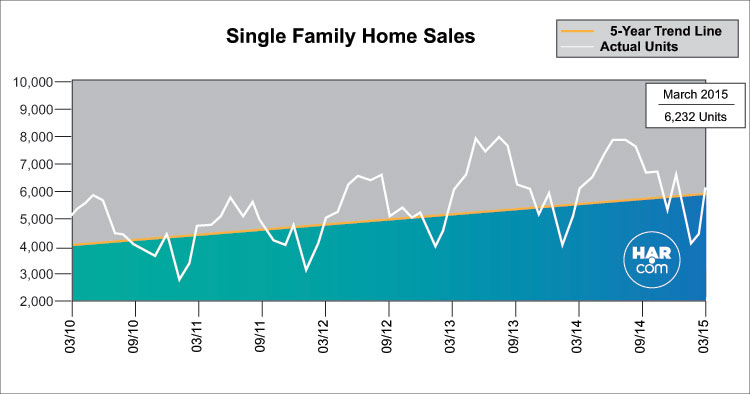 March single-family home sales totaled 6,232, up 3.8 percent from March 2014. This came on the heels of February’s sales decline – the first the market had seen since last July.

Home prices reached record highs for a March in Houston. The single-family average price increased 6.5 percent from last year to $276,837 and the median price climbed 8.9 percent year-over-year to $208,000. The average number of days it took to sell a home, or Days on Market (DOM), was 53 in March. It reached an historic low of 45 days last July. In March 2014, DOM stood at 60 days.

Broken out by housing segment, March sales performed as follows: 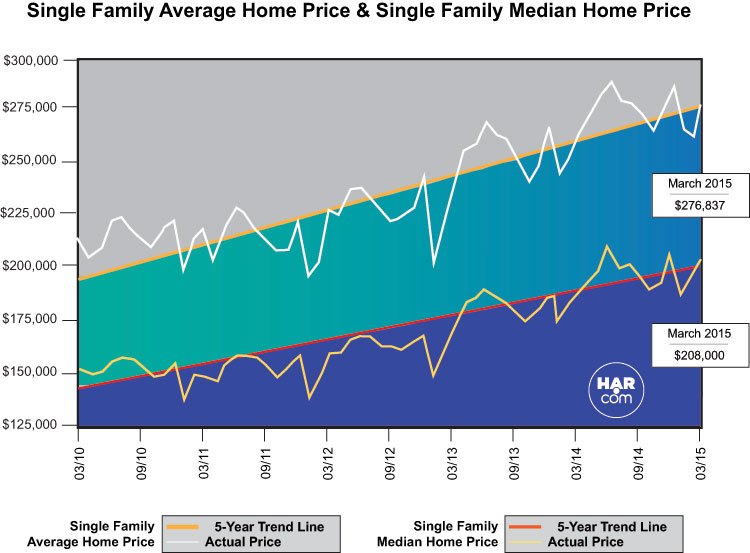 HAR also breaks out the sales figures for existing single-family homes. In March, existing home sales totaled 5,296. That is up 6.4 percent from the same month last year. The average sales price rose 9.3 percent year-over-year to $262,266 while the median sales price increased 10.3 percent to $193,000.

Houston Real Estate Milestones in March
The computerized Multiple Listing Service of the Houston Association of REALTORS® includes residential properties and new homes listed by 29,000 REALTORS® throughout Harris, Fort Bend and Montgomery counties, as well as parts of Brazoria, Galveston, Waller and Wharton counties. Residential home sales statistics as well as listing information for more than 50,000 properties may be found on the Internet at https://www.har.com.