According to the latest monthly data prepared by the Houston Association of REALTORS® (HAR), home sales jumped 17.0 percent compared to last March. Housing inventory, which had been at a 13-year low of 3.6 months during the first two months of the year, shrank slightly in March to 3.5 months.

The lower supply of homes and added demand sent prices higher. The median price of a single-family home—the figure at which half the homes sold for more and half for less—rose 6.5 percent to $172,000, an all-time record high for Houston. The average price rose 4.6 percent year-over-year to $236,195, the second highest level ever.

Contracts closed on 5,779 single-family homes. That is the largest one-month sales volume since August 2012. All housing segments experienced gains except for those priced under $80,000. Homes selling between $80,000 and $250,000 registered the greatest sales volume increase.

“REALTORS® continue to see multiple offers on single-family homes and condos throughout the Houston market, which suggests that our local economy is growing stronger by the day,” said HAR Chairman Danny Frank with Prudential Anderson Properties. “Governor Rick Perry recently stated that Texas is the fastest growing state in the country, and most of those people seem to be coming to the Greater Houston area because our job market is better than that of Dallas, Austin and San Antonio."

In reporting the addition of 118,700 net jobs during the past year, the U.S. Bureau of Labor Statistics ranked Houston No. 1 for job growth among the 20 most populous U.S. cities. The 4.5 percent hiring increase returns Houston to its previous job peak of the fall of 2011.

March sales of all property types in Houston totaled 7,006, a 19.4 percent increase over the same month last year and the largest one-month volume since last August. Total dollar volume for properties sold leapt 23.6 percent to $1.6 billion versus $1.3 billion a year earlier.

Month-end pending sales totaled 4,433. That is up 6.5 percent from last year and portends the likelihood of another month of positive sales when the April figures are tallied. Active listings, or the number of available properties, at the end of March declined 22.1 percent from March 2012 to 32,704.

Housing inventory in Houston held at 3.6 months in January and February, but slipped slightly in March to 3.5 months. That remains the lowest level recorded since 1999. Inventory first fell below a five-month supply in August 2012 and then dropped below a four-month supply last December. The inventory of single-family homes across the United States stands at 4.7 months, according to the latest report from the National Association of REALTORS® (NAR).

March sales of single-family homes in Houston totaled 5,779, up 17.0 percent from March 2012. That marks the 22nd straight monthly increase. 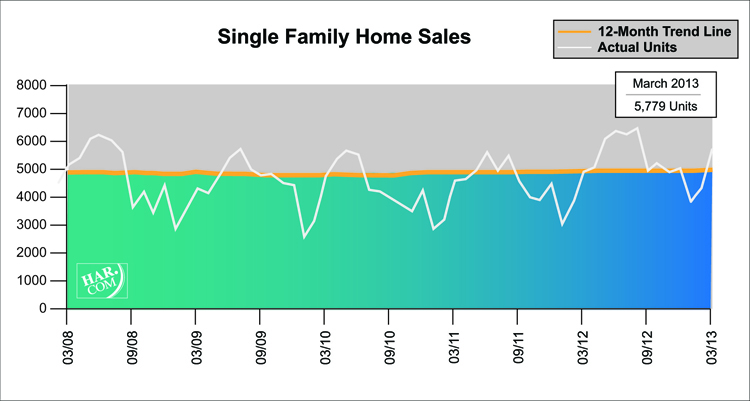 Broken out by housing segment, March sales performed as follows: 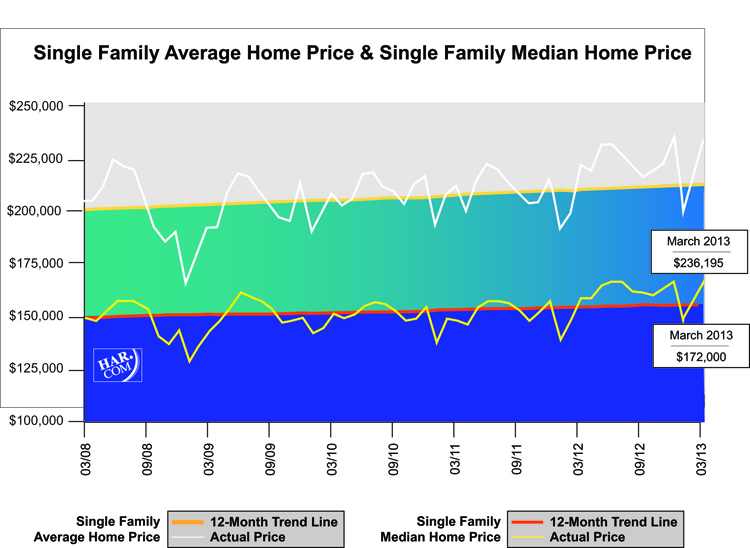 The median price of a single-family home rose 6.5 percent from last year to $172,000, the highest level ever recorded in Houston. At $236,195, the average sales price for single-family homes achieved the second highest ever, up 4.6 percent year-over-year.

HAR also breaks out the sales performance of existing single-family homes throughout the Houston market. In March 2013, existing home sales totaled 4,915, a 23.3 percent increase from the same month last year. The average sales price rose 4.9 percent year-over-year to $221,714 while the median sales price jumped 10.3 percent to $159,900.

Houston’s lease property market saw generally positive results in March. Rentals of single-family homes increased 7.8 percent compared to March 2012 and year-over-year townhouse/condominium rentals were flat. The average rent for single-family lease homes was $1,552 while it was $1,393 for townhouses/condominiums – representing increases of 4.3 percent and 5.0 percent respectively.

Houston Real Estate Milestones in March
The computerized Multiple Listing Service of the Houston Association of REALTORS® includes residential properties and new homes listed by REALTORS® throughout Harris, Fort Bend and Montgomery counties, as well as parts of Brazoria, Galveston, Waller and Wharton counties. Residential home sales statistics as well as listing information for more than 50,000 properties may be found on the Internet at https://www.har.com.