HOUSTON — (May 14, 2014) — Houston’s 34-month positive sales streak came to an end in April, reflecting the extremely tight supply of available housing. Despite the unchanged year-over-year sales volume, homes that did sell pushed pricing to the highest level of all time.

According to the latest monthly report prepared by the Houston Association of Realtors (HAR), home sales were unchanged from a year earlier, with April single-family home sales totaling 6,438. That is the largest one-month sales volume recorded since last August.

The average price of a single-family home increased 7.0 percent year-over-year to $270,505. The median price—the figure at which half the homes sold for more and half for less—rose 5.4 percent to $195,000. Both pricing figures represent record highs for Houston.

Single-family homes priced from $250,000 through the millions saw the greatest sales activity and accounted for the latest jump in prices. Homes priced at $150,000 and below experienced declines.

“It doesn’t come as a huge surprise that April sales were flat given our depleted housing inventory and the fact that sales last year at this time were virtually off the chart,” said HAR Chair Chaille Ralph with Heritage Texas Properties. “We also believe consumers may be waiting for more homes to hit the market in the price range they can afford before taking action. Many continue to rent in the interim, as reflected in our April report showing a further increase in single-family and townhome/condominium rentals.”

Despite no gains in total property sales for the month, total dollar volume and average and median pricing rose when compared to April 2013.

Month-end pending sales totaled 4,806, a 3.9 percent decline versus last year, which might suggest an environment of slower sales until inventory levels pick up. Active listings, or the number of available properties, at the end of April tumbled 13.5 percent to 28,114.

Houston’s housing inventory has held steady at a 2.6-month supply since December 2013, but is down from the 3.4 months of supply one year ago. The inventory of single-family homes across the U.S. currently stands at 5.2 months, according to the latest report from the National Association of Realtors.

April sales of single-family homes in Houston totaled 6,438. That is statistically unchanged from April 2013 and effectively ends the market’s record run of 34 consecutive months of increased sales. It also represents the greatest one-month sales volume since August 2013.

Home prices reached the highest levels of all time in Houston. The single-family median price climbed 5.4 percent from last year to $195,000 and the average price jumped 7.0 percent year-over-year to $270,505. 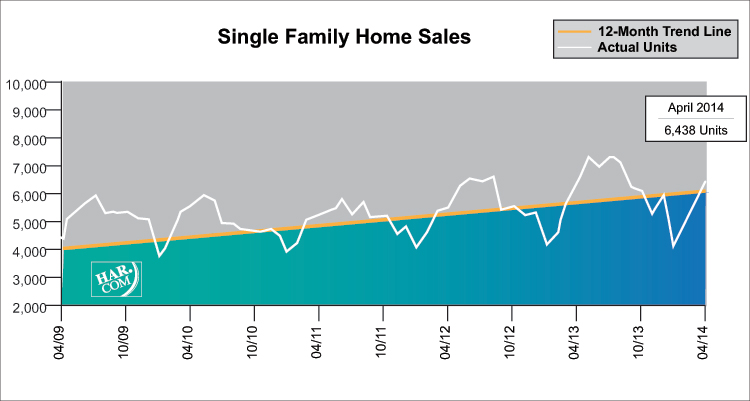 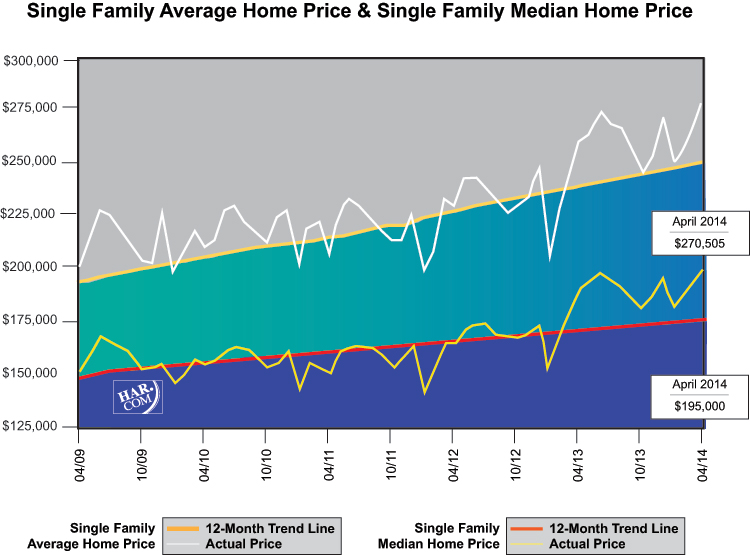 HAR also breaks out the sales performance of existing single-family homes for the Houston market. In April 2014, existing home sales totaled 5,564, a 1.7 percent increase from the same month last year. The average sales price rose 4.7 percent year-over-year to $252,497 while the median sales price increased 6.7 percent to $180,000.

Houston Real Estate Milestones in April
The computerized Multiple Listing Service of the Houston Association of REALTORS® includes residential properties and new homes listed by 25,000 REALTORS® throughout Harris, Fort Bend and Montgomery counties, as well as parts of Brazoria, Galveston, Waller and Wharton counties. Residential home sales statistics as well as listing information for more than 50,000 properties may be found on the Internet at https://www.har.com.

Founded in 1918, the Houston Association of REALTORS® (HAR) is a 26,000-member organization of real estate professionals engaged in every aspect of the industry, including residential and commercial sales and leasing, appraisal, property management and counseling. It is the largest individual dues-paying membership trade association in Houston as well as the second largest local association/board of REALTORS® in the United States.