Despite another month of positive sales and pricing, there are signs of tapered demand

HOUSTON — (December 17, 2013) — Houston home sales recorded a 30th straight month in positive territory in November, with buyers plunging inventory levels to an all-time low. The supply of homes fell to 2.9 months of inventory compared to 4.1 months in November 2012. Throughout 2013, inventory has dwindled from a 3.6-month supply in January to a 3.1-month supply in October, as more homes were being snapped up than were listed for sale.

Nonetheless, there are signs that the buying frenzy may be tapering. According to the latest monthly report prepared by the Houston Association of REALTORS®, home sales climbed 3.3 percent year-over-year – the smallest one-month sales increase since June 2011. November single-family home sales totaled 5,108. That is the lowest one-month sales volume since February of this year.

An ever-shrinking supply of homes put more upward pressure on pricing, as it has each month throughout the year. The median price of a single-family home—the figure at which half the homes sold for more and half for less—rose 8.7 percent to $181,000. The average price increased 8.4 percent year-over-year to $245,707. Both figures represent the highest prices for a November in Houston.

“It does not come as a surprise that the Houston housing market is showing signs of slowing down,” said HAR Chairman Danny Frank with Coldwell Banker, United REALTORS®. “There simply isn’t a plentiful supply of available homes out there. We are also in the midst of the holidays when, traditionally, home sales ease as consumers focus on their families and gift-giving. In addition, there has been an uptick in mortgage interest rates, which may have convinced prospective buyers to postpone home purchases until the new year.”

Foreclosure property sales reported in the HAR Multiple Listing Service (MLS) fell 49.0 percent compared to November 2012. Foreclosures currently make up 7.7 percent of all property sales, down from 19.6 percent at the start of the year. The median price of foreclosures rose 8.6 percent to $88,000.

November sales of all property types in totaled 6,180, a 5.6 percent increase over the same month last year. Total dollar volume for properties sold rose 13.1 percent to $1.5 billion versus $1.3 billion a year earlier.

Houston’s real estate market saw gains in all measurements in November when comparing sales to November 2012. Total property sales, total dollar volume and average and median pricing all rose on a year-over-year basis.

Month-end pending sales totaled 3,273, a 0.2 percent gain over last year and another possible indication of slower sales when the December numbers are tallied. Active listings, or the number of available properties, at the end of November dropped 17.0 percent to 30,341.

Houston’s inventory of available homes declined from 3.1 months in October to 2.9 months in November, down from 4.1 months of inventory one year ago. The inventory of single-family homes across the U.S. currently stands at 5.0 months, according to the latest report from the National Association of REALTORS®.

November sales of single-family homes in Houston totaled 5,108, up 3.3 percent from November 2012. That marks the 30th consecutive monthly increase. It also represents the smallest one-month sales increase since June 2011 and the lowest one-month sales volume since February 2013.

Home prices reached the highest levels ever recorded in Houston for a November. The single-family median price rose 8.7 percent from last year to $181,000 and the average price climbed 8.4 percent year-over-year to $245,707. 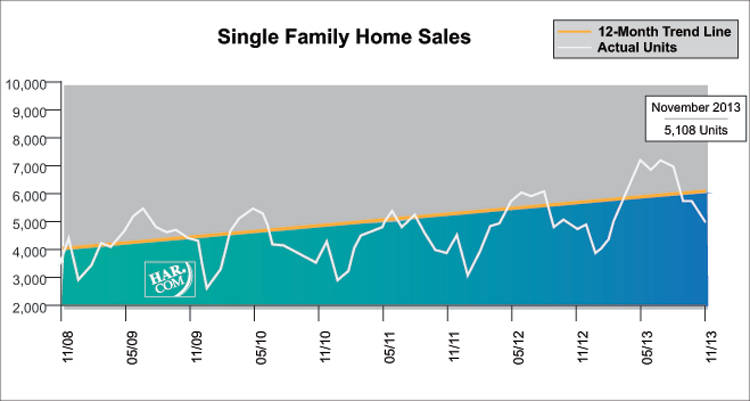 Broken out by housing segment, November sales performed as follows: 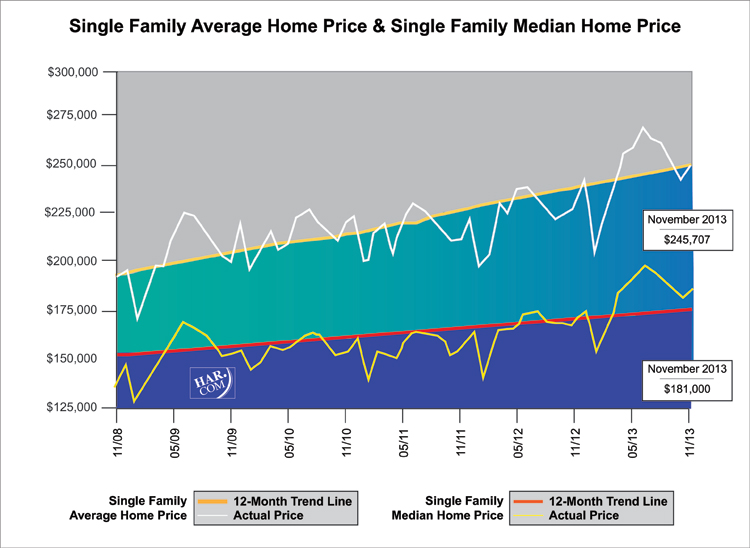 HAR also breaks out the sales performance of existing single-family homes throughout the Houston market. In November 2013, existing home sales totaled 4,287, a 5.6 percent increase from the same month last year. The average sales price rose 6.1 percent year-over-year to $226,267 while the median sales price rose 10.5 percent to $169,000.

Houston’s lease property market showed mixed results in November. Rentals of single-family homes rose 7.7 percent compared to November 2012 while year-over-year townhouse/condominium rentals were flat. Average rents are down from their summertime record highs, although they are up year-over-year. The average rent for a single-family home rose 4.8 percent to $1,591 while the average rent for a townhouse/condominium increased 5.1 percent to $1,466

Houston Real Estate Milestones in November
The computerized Multiple Listing Service of the Houston Association of REALTORS® includes residential properties and new homes listed by REALTORS® throughout Harris, Fort Bend and Montgomery counties, as well as parts of Brazoria, Galveston, Waller and Wharton counties. Residential home sales statistics as well as listing information for more than 50,000 properties may be found on the Internet at https://www.har.com.