SEPTEMBER HOME SALES IN HOUSTON REMAIN SOFT WHILE PRICING CONTINUES TO HOLD STEADY
Property sales slip for a third consecutive month, but average and median prices achieve the highest levels for a September in Houston

HOUSTON — (October 19, 2010) — September brought the Houston housing market its third straight month of declining sales volume following the expiration of the homebuyer tax credit. However, despite the drop, pricing continued to demonstrate strength with a boost in the average price and a slight uptick in the median price of single-family homes.

According to the latest monthly data compiled by the Houston Association of REALTORS® (HAR), September sales of single-family homes throughout the Houston market fell 18.6 percent compared to September 2009. Declines were recorded in three of the five pricing segments.

The average price of a single-family home rose 5.0 percent from September 2009 to $215,250, primarily due to continued strength in the upper end of the market The September single-family home median price—the figure at which half of the homes sold for more and half sold for less—edged up 0.2 percent from one year earlier to $156,250. Both average and median pricing achieved the highest levels for a September in Houston.

Foreclosure property sales reported in the Multiple Listing Service (MLS) declined 6.9 percent in September compared to one year earlier. The median price of September foreclosure sales slid 5.2 percent to $82,500 on a year-over-year basis. These figures were collected before the national controversy arose over alleged improprieties in preparation and review of foreclosure paperwork and therefore does not reflect any potential freeze on such transactions.

Sales of all property types in Houston for September totaled 4,648, down 18.0 percent compared to September 2009. Total dollar volume for properties sold during the month was $958 million versus $1.1 billion one year earlier, representing a 12.9 percent drop.

"The Houston real estate market continues to experience slower sales coupled with strong pricing, and that combination still puts us in an enviable position compared to many other markets around the country," said Margie Dorrance, HAR chair and principal at Keller Williams Realty Metropolitan. "With interest rates at all-time lows, we look to the fourth quarter of 2010 with hopeful eyes provided the local job market is healthy."

The month of September brought Houston's overall housing market largely negative results when all listing categories are compared to September of 2009. Total property sales and total dollar volume fell on a year-over-year basis while the average single-family home sales price rose and the median price was flat.

Month-end pending sales for September totaled 3,023, down 17.2 percent from last year, suggesting the probability of another sluggish month for sales in October. The number of available properties, or active listings, at the end of September rose 18.7 percent from September 2009 to 54,027. The increase in available inventory coupled with slow sales volume has pushed the inventory of single-family homes for September to 7.7 months compared to 6.2 months one year earlier. This figure still remains healthier than the national inventory of single-family homes of 11.6 months, reported by the National Association of REALTORS® (NAR).

September sales of single-family homes in Houston totaled 3,903, down 18.6 percent from September 2009. This marks the third monthly decline in sales volume after four consecutive months of accelerated sales activity that was largely driven by the tax credit. Broken out by segment, September sales of homes in the $80K-$150K range dropped 26.1 percent; sales of homes between $150K and $250K were off 25.4 percent; and sales of homes ranging from $250K-$500K slid 18.0 percent. Sales of homes priced from $80K and below climbed 6.3 percent while those that make up the luxury market—priced from $500K and up—rose 6.6 percent. Sales of all property types combined declined 18.0 percent in September on a year-over-year basis. However, on a year-to-date basis, single-family home sales are off 1.8 percent from 2009 levels. 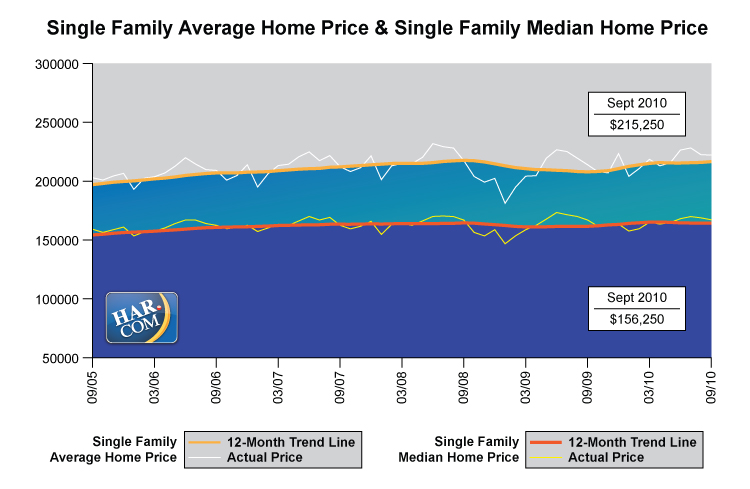 HAR also breaks out the sales performance of existing single-family homes throughout the Houston market. In September 2010, existing home sales totaled 3,281, an 18.2 percent decline from September 2009. The average sales price edged up 6.0 percent to $202,388 compared to last year while the median sales price of $143,500 represents a decline of 2.4 percent from its September 2009 level.

The number of townhouses and condominiums that sold in September fell 28.5 percent compared to one year earlier. In the greater Houston area, 338 units were sold last month versus 473 properties in September 2009.

The computerized Multiple Listing Service of the Houston Association of REALTORS® includes residential properties and new homes listed by 25,000 REALTORS® throughout Harris, Fort Bend and Montgomery counties, as well as parts of Brazoria, Galveston, Waller and Wharton counties. Residential home sales statistics as well as listing information for more than 50,000 properties may be found on the Internet at https://www.har.com.

Founded in 1918, the Houston Association of REALTORS® (HAR) is a 25,000-member organization of real estate professionals engaged in every aspect of the industry, including residential and commercial sales and leasing, appraisal, property management and counseling. It is the largest individual dues-paying membership trade association in Houston as well as the second largest local association/board of REALTORS® in the United States.