HOUSTON — (March 9, 2016) — The Houston real estate market managed to resist most of the effects of the energy downturn in February, with home sales up over two percent compared to the same month last year. Single-family homes priced between $150,000 and $500,000 recorded positive sales volume while the luxury home segment experienced the biggest decline.

According to the latest monthly report compiled by the Houston Association of Realtors (HAR), February single-family home sales rose 2.2 percent versus February 2015, with a total of 4,602 sales compared to 4,505 a year earlier. New listings helped inventory grow from a 2.7-months supply to 3.4 months.

â€œSo far in 2016, the Houston housing market has remained healthy despite the ongoing strains facing the energy industry,â€ said HAR Chairman Mario Arriaga with First Group. â€œSales are still down in the luxury home market, but, just as we saw in January, mid-range housing performed well and inventory levels grew. There was also a lot of activity among rental properties.â€

Last week, the Greater Houston Partnership (GHP) reported revised Texas Workforce Commission data showing that the Houston metropolitan area gained 15,200 jobs in 2015, not the 23,200 jobs previously estimated. The GHP report also stated that nearly 51,000 jobs were lost in January, a 1.7 percent decline and slightly above what is considered average for that time of year.

The single-family home average price squeezed out a fractional 0.5 percent year-over-year increase, reaching $260,872, the highest figure ever for a February. The median priceâ€”the figure at which half of the homes sold for more and half sold for lessâ€”was unchanged at $200,000.

Month-end pending sales for single-family homes totaled 6,801. That is up 1.3 percent compared to last year. Total active listings, or the total number of available properties, at the end of February rose 17.6 percent from February 2015 to 32,914.

An increase in new listings in February gave single-family homes inventory a boost, with levels climbing from a 2.7-months supply to 3.4 months. For perspective, the national supply of homes reported by the National Association of Realtors (NAR) currently stands at 4.0 months. 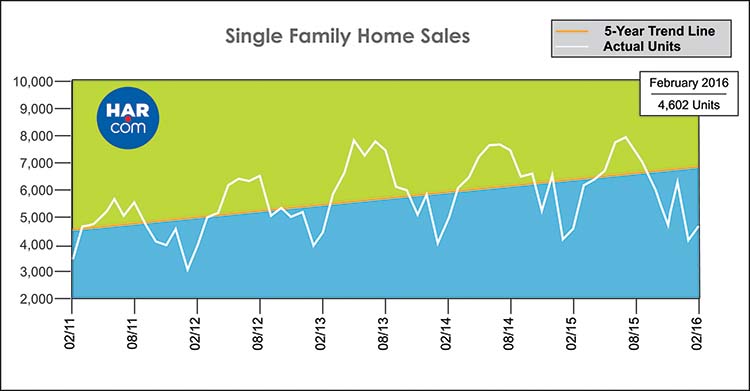 Single-family home sales totaled 4,602 in February, up 2.2 percent from February 2015. That marks the first increase in sales volume since last September. 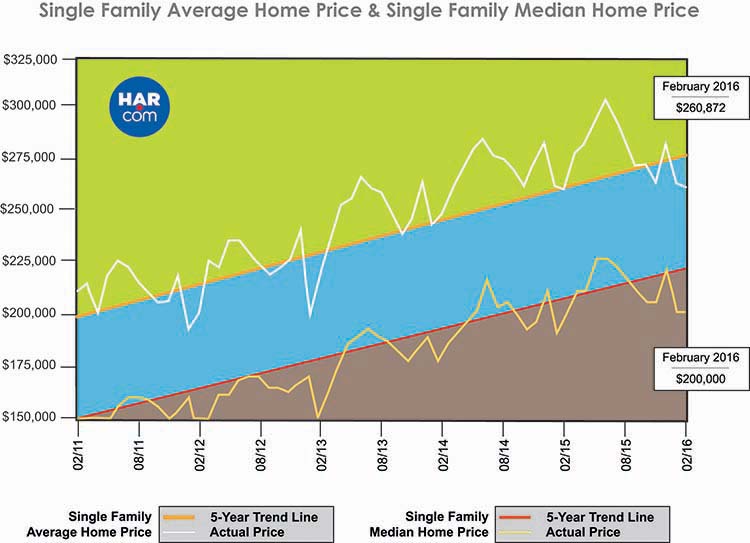 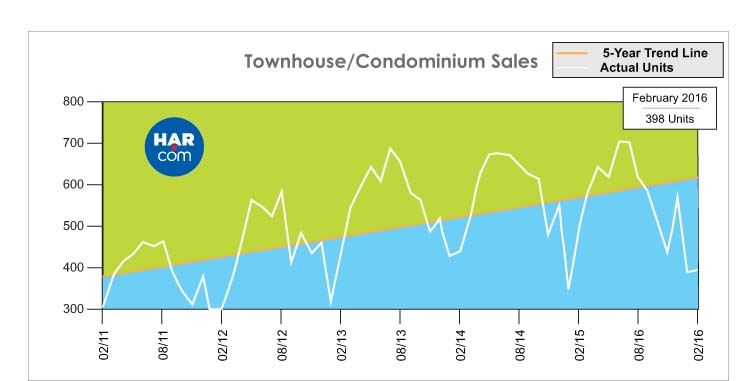 Houston Real Estate Highlights in February
The computerized Multiple Listing Service of the Houston Association of REALTORS® includes residential properties and new homes listed by 32,000 REALTORSÂ® throughout Harris, Fort Bend and Montgomery counties, as well as parts of Brazoria, Galveston, Waller and Wharton counties. Residential home sales statistics as well as listing information for more than 50,000 properties may be found on the Internet at https://www.har.com.