THE HOUSTON HOUSING MARKET FLEXES ITS MUSCLE IN JUNE

According to the latest monthly report prepared by the Houston Association of Realtors (HAR), June single-family home sales totaled 7,935 units—the highest one-month volume ever— compared to 7,621 a year earlier. The time it took to sell the average home reached a record low of 43 days.

Months of inventory, the estimated time it would take to deplete the current active housing inventory based on the previous 12 months of sales, increased to a 3.2-months supply versus 2.9 months last June. That is the greatest supply since September 2013, but remains well below the current national supply of 5.1 months of inventory.

Home prices achieved historic highs, with the average price of a single-family home up 6.6 percent year-over-year to $302,942. The median price—the figure at which half the homes sold for more and half for less—rose 4.9 percent to $225,000.

June sales of all property types amounted to a record-setting 9,480 units, an increase of 3.3 percent versus the same month last year. Total dollar volume rose 9.5 percent to $2.7 billion.

"I think it speaks very well for the health of our real estate market when you have a month in which sales are up, rentals are up, inventory is growing, and you’re comparing it all to the record year of 2014,” said HAR Chair Nancy Furst with Berkshire Hathaway HomeServices Anderson Properties. “We still expect normalization in the marketplace later this year, and that may well mean these alternating up and down sales months, but the bottom line appears to be that there is no lack of interest in housing in Houston, Texas."

The Houston housing market enjoyed across-the-board gains in the June 2015 versus June 2014 analysis, with single-family home sales, total property sales, and total dollar volume all up, and prices reaching the highest levels of all time. Month-end pending sales for single-family homes totaled 8,063, a 10.0 percent increase compared to a year earlier.

Houston's housing inventory expanded in June to a 3.2-months supply versus the 2.9-months supply of one year earlier. That matches the inventory level of September 2013, but is well below the current national supply of homes which stands at a 5.3-months supply, according to the National Association of Realtors. 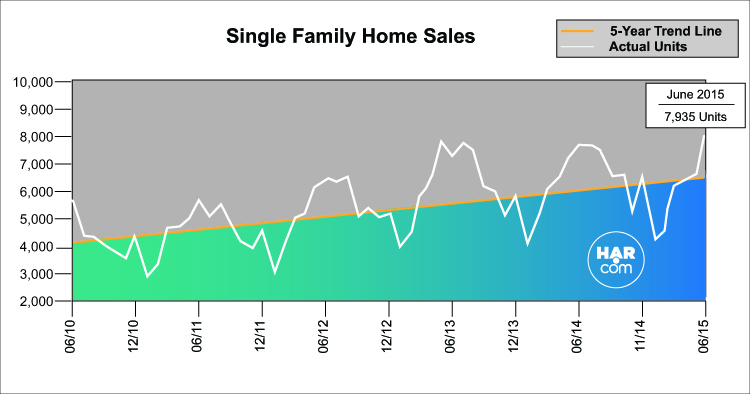 Single-family home sales totaled 7,935 in June, up 4.1 percent from June 2014. Home prices reached the highest levels of all time in Houston. The single-family average price jumped 6.6 percent from last year to $302,942 and the median price climbed 4.9 percent year-over-year to $225,000. The average number of days it took to sell a home, or Days on Market (DOM), reached a record low of 43 in June, down from the DOM of 47 a year earlier.

Single-family home sales tracked on a year-to-date basis were flat in June at 35,632. 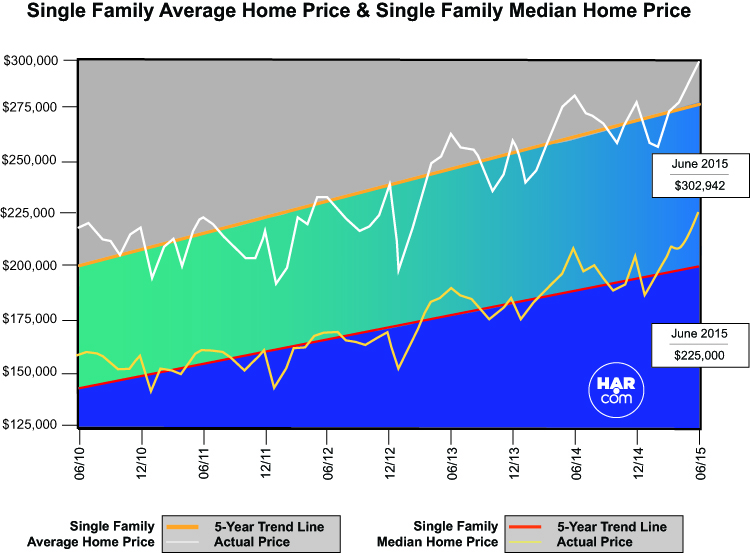 HAR also breaks out the sales figures for existing single-family homes. Existing home sales totaled 6,887 in June. That is a 5.1 percent increase over the same month last year. The average sales price rose 6.5 percent year-over-year to $286,441 while the median sales price gained 7.1 percent to $210,000.

After suffering their first decline of the year in May, sales of townhouses and condominiums rose 6.7 percent in June. A total of 721 units sold compared to 676 properties in June 2014. The average price, however, dipped 2.5 percent to $201,557 while the median price increased 4.9 percent to $161,000. Inventory grew slightly from a 2.6-months supply to 2.7 months. 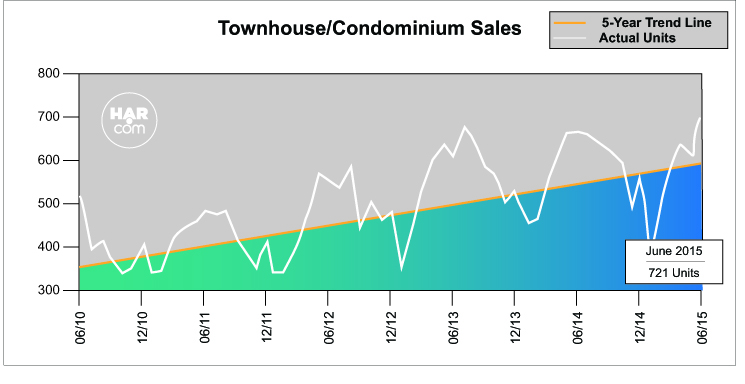 Demand for single-family lease homes was on the rise in June to the tune of 4.6 percent. The average rent for such properties climbed 4.2 percent to $1,875. Townhouse/condominiums leases were up 5.1 percent in June with their average rent climbing 8.6 percent to $1,759.

Houston Real Estate Milestones in June
The computerized Multiple Listing Service of the Houston Association of REALTORS® includes residential properties and new homes listed by 29,000 REALTORS® throughout Harris, Fort Bend and Montgomery counties, as well as parts of Brazoria, Galveston, Waller and Wharton counties. Residential home sales statistics as well as listing information for more than 50,000 properties may be found on the Internet at https://www.har.com.