HOUSTON — (February 18, 2014) — The Houston housing market exhibited the textbook laws of supply and demand in January as low housing inventory meant that there were fewer homes to purchase, but that buyers paid more for the homes that were available.

Home sales edged up 1.7 percent year-over-year – the smallest one-month sales increase since June 2011, according to the latest monthly report prepared by the Houston Association of REALTORS®. January single-family home sales totaled 3,957. That is the lowest one-month sales volume since February 2012.

January marked the 32nd consecutive month that sales have remained in positive territory. The supply of homes matched December’s 2.6 months of inventory, but compared to a 3.6-month supply in January 2013.

The combination of shrinking inventory and heavy sales activity among homes between $200,000 and $600,000 pushed pricing up significantly in the year-over-year comparison. The median price of a single-family home—the figure at which half the homes sold for more and half for less—jumped 18.0 percent to $177,000. The average price shot up 22.0 percent year-over-year to $244,000. Both figures represent the highest prices for a January in Houston.

“January is traditionally a slow time of year for home sales, but throw a depleted supply of inventory into the mix and you get exactly what the Houston market experienced last month,” said HAR Chair Chaille Ralph with Heritage Texas Properties. “Until more housing inventory hits the market, we are likely to continue seeing lower sales volume and higher pricing than we did throughout 2013. It’s the basic economic principle of supply and demand playing out.”

Foreclosure property sales reported in the HAR Multiple Listing Service (MLS) continued its months-long decline, dropping 53.2 percent compared to January 2013. Foreclosures currently make up 9.2 percent of all property sales, down from a 19.6 percent share a year earlier. The median price of foreclosures rose 6.9 percent to $86,625.

January sales of all property types in totaled 4,929, a 5.6 percent increase over the same month last year. Total dollar volume for properties sold rose 26.8 percent to $1.1 billion versus $905 million a year earlier.

Month-end pending sales totaled 3,730, a 3.9 percent gain over last year and another possible indication of a steady but lower volume of sales when the February numbers are tallied. Active listings, or the number of available properties, at the end of January dropped 15.9 percent to 28,211.

Houston's inventory of available homes remained flat at a 2.6-month supply month-over-month in January, but was down from the 3.6 months of supply one year ago. The inventory of single-family homes across the U.S. currently stands at 4.6 months, according to the latest report from the National Association of REALTORS®.


* Months inventory estimates the number of months it will take to deplete current active inventory based on the prior 12 months sales activity. This figure is representative of the single-family homes market.

January sales of single-family homes in Houston totaled 3,957, up 1.7 percent from January 2013. That marks the 32nd consecutive monthly increase. It also represents the smallest one-month sales increase since June 2011 and the lowest one-month sales volume since February 2012.

Home prices reached the highest levels ever recorded in Houston for a January. The single-family median price climbed 18.0 percent from last year to $177,000 and the average price soared 22.0 percent year-over-year to $244,070. 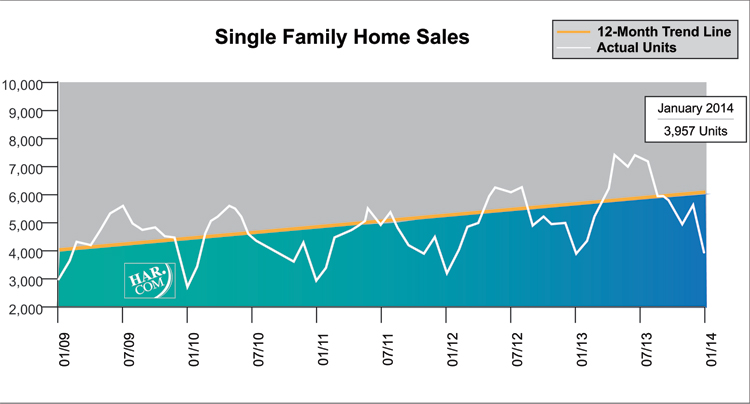 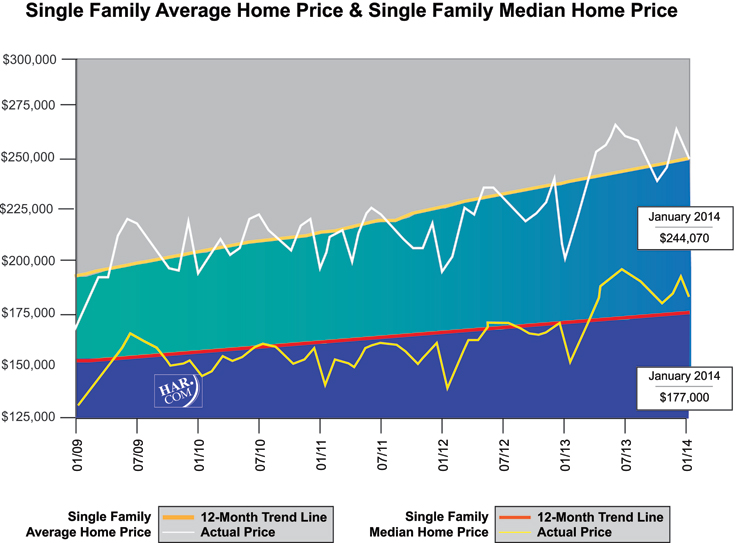 HAR also breaks out the sales performance of existing single-family homes throughout the Houston market. In January 2014, existing home sales totaled 3,396, a 2.1 percent increase from the same month last year. The average sales price rose 23.2 percent year-over-year to $226,424 while the median sales price rose 20.7 percent to $164,800.

Houston Real Estate Milestones in January
The computerized Multiple Listing Service of the Houston Association of REALTORS® includes residential properties and new homes listed by 24,000 REALTORS® throughout Harris, Fort Bend and Montgomery counties, as well as parts of Brazoria, Galveston, Waller and Wharton counties. Residential home sales statistics as well as listing information for more than 50,000 properties may be found on the Internet at https://www.har.com.