THE HOUSTON REAL ESTATE MARKET CHARGES INTO 2013 AT FULL-THROTTLE

All housing segments saw gains in January, with homes priced from $250,000 through the millions registering the greatest sales volume and accounting for the boost in pricing.

“The Houston real estate market gained even more momentum as the new year began,” said HAR Chairman Danny Frank with Prudential Anderson Properties. “We are maintaining a watchful eye on the local housing supply because a significant decline from current inventory levels could potentially have an adverse effect on sales and drive prices disproportionately higher. Market conditions right now are excellent for those considering selling their homes, especially as further growth in hiring continues to drive more potential buyers to the Houston area every day.”

Foreclosure property sales reported in the HAR Multiple Listing Service (MLS) declined 11.9 percent compared to January 2012. Foreclosures currently make up 19.6 percent of all property sales, which is the highest level since February 2012. The median price of January foreclosures dipped 1.5 percent to $81,074.

January sales of all property types in Houston totaled 4,680, a 29.1 percent increase over the same month last year. Total dollar volume for properties sold in January leapt 33.6 percent to $908 million versus $680 million a year earlier.

Month-end pending sales for January totaled 3,591. That is up 13.5 percent from last year and signals the likelihood of further gains when February property sales data are totaled. Active listings, or the number of available properties, at the end of January declined 20.3 percent from January 2012 to 33,532.

Housing inventory in Houston retreated to 3.6 months in January, the lowest level since December 1999. Inventory first fell below a five-month supply in August 2012 and then dropped below a four-month supply last December. By contrast, the highest months inventory in recent history was 8.2 in June 1996. For perspective, the national inventory of single-family homes stands at 4.4 months, according to the latest report from the National Association of REALTORS® (NAR).

January sales of single-family homes in Houston totaled 3,899, up 28.3 percent from January 2012. That marks the 20th straight monthly increase. 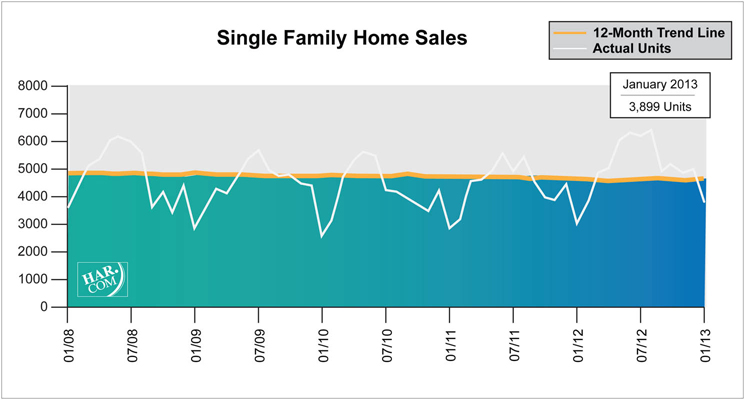 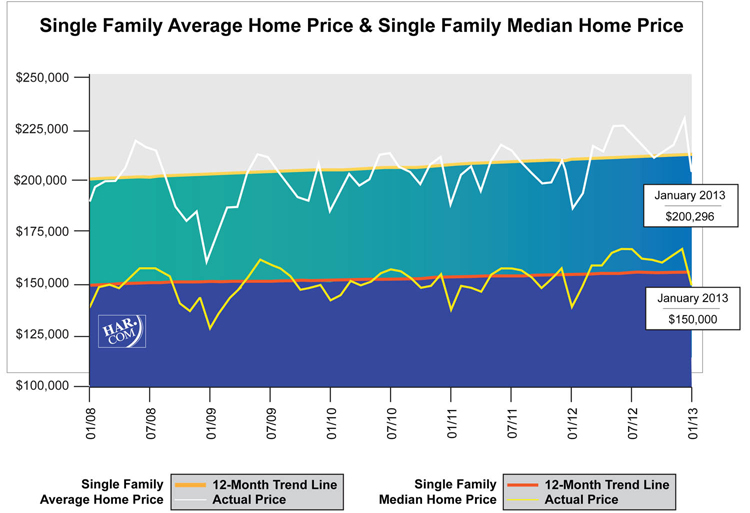 Demand within Houston’s lease property market leveled off in January. Rentals of single-family homes edged up a fractional 0.7 percent compared to January 2012, while year-over-year townhouse/condominium rentals were flat. The average rent for single-family lease homes was $1,548 while it was $1,393 for townhouses/condominiums – representing increases of 7.4 percent and 9.3 percent respectively.