HOUSTON — (October 16, 2012) — Houston-area property sales have now held firmly to positive territory for 16 straight months, and September’s flurry of home buying caused a further drawdown of inventory and hike in prices. While monthly sales volume eased a bit compared to August, there was enough activity to lower available housing inventory to levels not seen since March 2002.

According to the latest monthly data prepared by the Houston Association of REALTORS® (HAR), single-family home sales rose 8.7 percent compared to September 2011. Contracts closed on 5,014 homes in September, driving inventory down to 4.7 months. Only the low end of the housing market experienced a drop in sales.

"Demand for homes throughout Houston continues to outpace supply as we transition into the fall season," said Wayne A. Stroman, HAR chairman and CEO of Stroman Realty. "Home sales traditionally begin to taper off this time of year, so we are not worried about inventory declining to unhealthy levels. For those considering selling a home, current market conditions present excellent opportunities, and with interest rates falling to new record lows, this also remains an outstanding time to buy."

Foreclosure property sales reported in the Multiple Listing Service (MLS) declined 12.5 percent compared to September 2011. Foreclosures made up 16.1 percent of all property sales, the lowest one-month sales volume all year and a likely reflection of the sales decline among homes priced at $80,000 and below. The median price of September foreclosures was flat at $82,000.

September sales of all property types in Houston totaled 5,943, an 8.7 percent increase compared to September 2011. Total dollar volume for properties sold during the month increased 13.9 percent to $1.2 billion versus $1.1 billion a year earlier.

Month-end pending sales for September totaled 3,483. That is up 11.6 percent from last year and portends another positive month when the October property sales data are totaled. Active listings, or the number of available properties, at the end of September declined 17.8 percent from September 2011 to 39,319.

The inventory of single-family homes is now below five months, dropping from 6.8 months a year ago to 4.7 months, a level the Houston market last observed in March 2002. Last month, HAR reported that the August months inventory stood at 4.9, however that has been revised to 5.0. Housing inventory has remained below a six-month supply since December 2011. For perspective, the national inventory of single-family homes is 6.1 months, according to the National Association of REALTORSâ (NAR). A supply of less than six months is traditionally defined as a "seller's market," however buyers have been enjoying the benefits of historically low mortgage interest rates.
* Months inventory estimates the number of months it will take to deplete current active inventory based on the prior 12 months sales activity. This figure is representative of the single-family homes market.

September sales of single-family homes in Houston totaled 5,014, up 8.7 percent from September 2011. That marks the 16th straight monthly increase and represents the longest stretch of positive sales since a 37-month run ended in February 2007, before the recession. 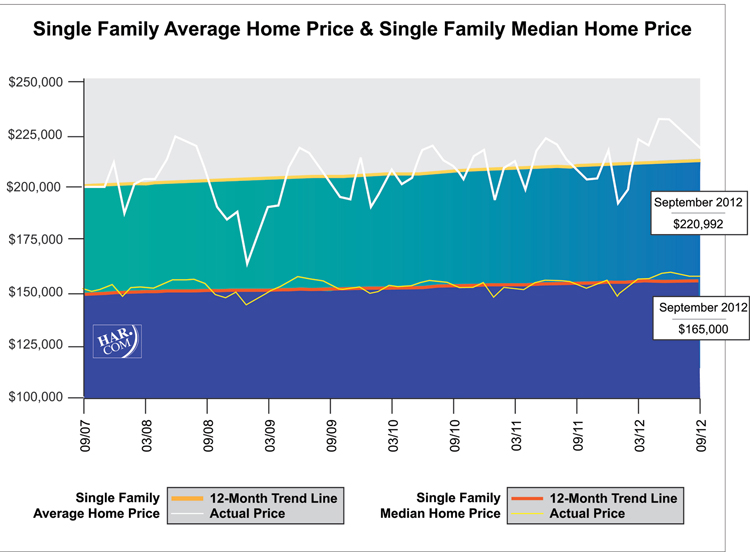 The average price of a single-family home rose 4.7 percent from last year to $220,992, the highest level for a September in Houston. The highest and second highest average prices of all time were recorded in May and June of this year, respectively. At $165,000, the median sales price for single-family homes also achieved a record high for a September in Houston, up 6.1 percent year-over-year.