HOUSTON — (March 11, 2015) — Falling oil prices and related layoffs, limited housing inventory, and rising home prices contributed to the first decline in home sales the Houston market has seen in six months. Sales of single-family homes dropped 5.8 percent year-over-year in February, led largely by faltering activity among homes priced above $500,000, which, until now, had been one of the market’s strongest and steadiest segments.

According to the latest monthly report prepared by the Houston Association of Realtors (HAR), February single-family home sales totaled 4,521 units compared to 4,798 a year earlier. Months of inventory, the estimated time it would take to deplete the current active housing inventory based on the previous 12 months of sales, edged up slightly to a 2.7-months supply. That is still well below the current national supply of 4.7 months of inventory.

Home prices achieved record highs for a February. The average price of a single-family home rose 4.5 percent year-over-year to $259,293. The median price—the figure at which half the homes sold for more and half for less—jumped 7.9 percent to $199,400.

“We are witnessing the start of exactly what economists predicted would create a more ‘normalized’ Houston real estate market: declining sales volume, increasing prices, and improvement in housing inventory levels,” said HAR Chair Nancy Furst with Berkshire Hathaway HomeServices Anderson Properties. “While some local energy jobs have gone away, the Texas Workforce Commission just declared 2014 one of the best years for job creation in Houston, with almost 105,000 jobs added and continued hiring expected this year, albeit at lower levels. No one knows for sure where oil prices will go in the months ahead, but the diversity of Houston’s economy should help our housing market hold its own during this transition.”

With the exception of home prices, which rose, indicators for the Houston real estate market entered negative territory in February, with single-family home sales volume, total property sales volume, and total dollar volume all down compared to February 2014.

Month-end pending sales for all property types totaled 3,719. That is down 1.5 percent compared to last year and suggests the possibility of another dip in sales activity when the March numbers are tallied. Active listings, or the number of available properties, at the end of February was 27,990, up 0.7 percent from last year. 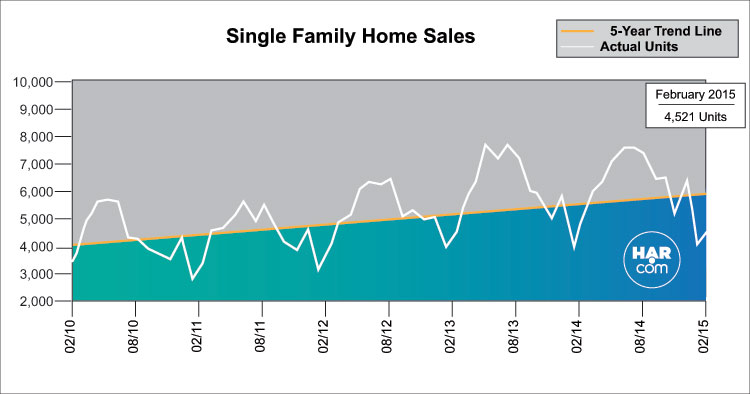 February single-family home sales totaled 4,521, down 5.8 percent from February 2014. The last drop in sales volume took place in July 2014, and was a 1.0 percent year-over-year decline.

Home prices reached record highs for a February in Houston. The single-family average price increased 4.5 percent from last year to $259,293 and the median price climbed 7.9 percent year-over-year to $199,400. The number of days it took a home to sell¬, or Days on Market, was 59 versus 64 last February. In July 2014, it reached an historic low of 45 days. 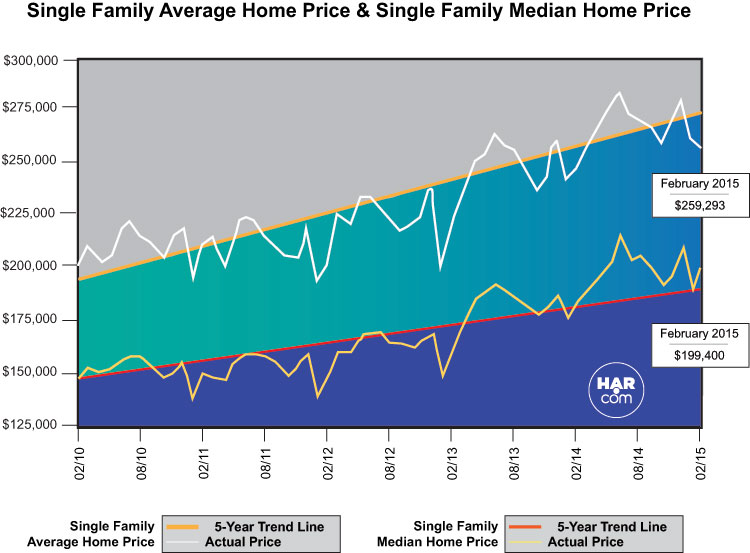 HAR also breaks out the sales figures for existing single-family homes. In February, existing home sales totaled 3,786. That is down 4.7 percent from the same month last year. The average sales price climbed 3.0 percent year-over-year to $238,379 while the median sales price rose 7.1 percent to $182,000.

After suffering a year-over-year decline of 20.9 percent last month, sales of townhouses and condominiums rose 10.6 percent in February. A total of 489 units sold last month compared to 442 properties in February 2014. The average price soared 12.2 percent to $200,191 and the median price rose 4.2 percent to $145,000. Both prices represented record highs for a February. Inventory was flat at a 2.6-months supply.

Demand for lease properties rose slightly in February. Single-family home rentals edged up a fractional 0.4 percent compared to February 2014, while year-over-year townhouse/condominium rentals increased 1.4 percent. The average rent for a single-family home was up 5.4 percent to $1,676 and the average rent for a townhouse/condominium rose 2.0 percent to $1,509.

Houston Real Estate Milestones in February
The computerized Multiple Listing Service of the Houston Association of REALTORS® includes residential properties and new homes listed by 29,000 REALTORS® throughout Harris, Fort Bend and Montgomery counties, as well as parts of Brazoria, Galveston, Waller and Wharton counties. Residential home sales statistics as well as listing information for more than 50,000 properties may be found on the Internet at https://www.har.com.