MLS Report for December and Full-Year 2016

HOUSTON — (January 11, 2017) — Despite the slowdown that economists predicted as falling oil prices and resulting energy industry layoffs carried over from 2015, the Houston housing market held steady throughout 2016 and gained momentum in the final months of the year to set a new record for home sales. Homes priced at $500,000 and up, which experienced declining sales from August 2015 through October 2016 as a result of the energy slump, achieved an impressive turnaround with double-digit sales increases in November and December.

"We could not be happier with the Houston housing market’s 2016 performance,” said HAR Chair Cindy Hamann with Heritage Texas Properties. “The year began on a cautionary note because of energy-related layoffs that did affect our higher-priced housing. But what we saw by the end of 2016 is the reflection of a truly diversified Houston economy that continues to benefit from hiring in other industries and a steady influx of consumers from markets across the country and around the world."

The single-family home median price (the figure at which half of the homes sold for more and half sold for less) rose 2.7 percent to $225,903 That marks the highest median price ever for a December. The average price increased 4.3 percent to $294,512, which also represents a December high.

When 2015 segued to 2016, home sales had been on the decline as plummeting oil prices and energy layoffs sparked jitters throughout the Houston economy. But the housing market demonstrated resiliency, with sales up during all but three months of 2016. By the end of December, a record 76,449 single-family homes had sold. That represents an increase of 3.0 percent from 2015 and is up 1.3 percent from the previous record of 75,470 home sales set in 2014.

Month-end pending sales for single-family homes totaled 4,746, an increase of 11.7 percent compared to last year. Total active listings, or the total number of available properties, rose 7.1 percent from December 2015 to 33,802.

Single-family homes inventory grew fractionally from a 3.2-months supply to 3.3 months. For perspective, housing inventory across the U.S. currently stands at a 4.0-months supply, according to the latest report from the National Association of Realtors (NAR).

* Months inventory estimates the number of months it will take to deplete current active inventory based on the prior 12 months sales activity. This figure is representative of the single-family homes market.
** Effective May 2015, in an effort to be consistent with industry standards, the Houston MLS is now including all categories of pending sales in its reporting. Previously, the Houston MLS did not include “option pending” and “pending continue to show” listings in its reporting of pending sales. The new methodology is now all-inclusive for listings that went under contract during the month.
Single-Family Homes Update 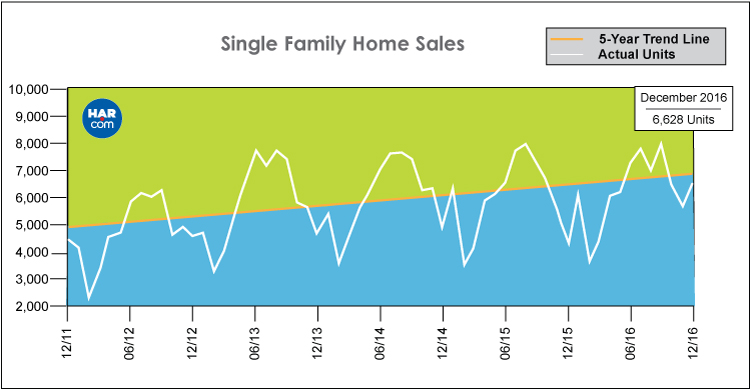 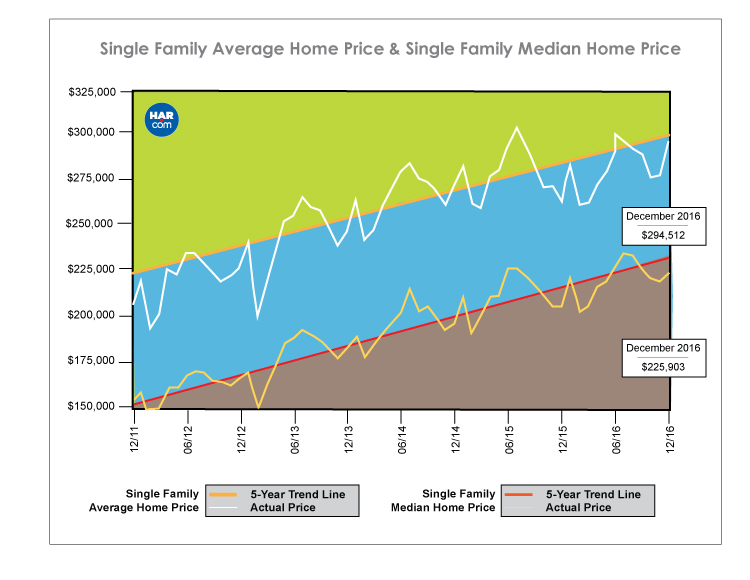 HAR also breaks out the sales figures for existing single-family homes. Existing home sales totaled 5,345 in December, up 6.4 percent versus the same month last year. The average sales price rose 5.4 percent to $270,731 while the median sales price jumped 7.2 percent to $209,000. 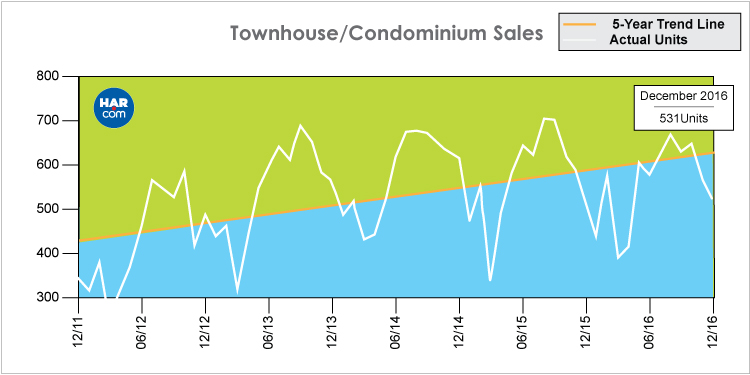 Houston Real Estate Highlights for December and Full-Year 2016
The computerized Multiple Listing Service of the Houston Association of REALTORS® includes residential properties and new homes listed by 36,000 REALTORS® throughout Harris, Fort Bend and Montgomery counties, as well as parts of Brazoria, Galveston, Waller and Wharton counties. Residential home sales statistics as well as listing information for more than 50,000 properties may be found on the Internet at https://www.har.com.

Founded in 1918, the Houston Association of REALTORS® (HAR) is a 36,000-member organization of real estate professionals engaged in every aspect of the industry, including residential and commercial sales and leasing, appraisal, property management and counseling. It is the largest individual dues-paying membership trade association in Houston as well as the second largest local association/board of REALTORS® in the United States.