HOUSTON — (December 20, 2011) — Consumers kept the Houston real estate market humming in November, accounting for the sixth consecutive month of positive home sales this year. The year-over-year increase in single-family homes sales, along with another rise in pending sales and further decline in months inventory, reflects a market that continues to benefit from a healthy absorption of housing inventory as 2011 winds down.

November sales of single-family homes rose 11.4 percent versus one year earlier, according to the latest monthly data prepared by the Houston Association of REALTORS® (HAR). On a year-to-date basis, sales were up 4.1 percent. All segments of the housing market experienced growth except for the luxury segment—those homes priced from $500,000 and above—whose decline pulled down the overall average price. The median price saw its biggest increase since February of this year.

"The November report contains a lot of positive data that suggests the Houston real estate market is wrapping up 2011 on solid footing," said Carlos P. Bujosa, HAR chairman and VP at Transwestern. "The Greater Houston Partnership has forecast that our region will add more than 84,000 jobs next year, and as long as that's the case, we would hope to see further strengthening of the local economy, including real estate."

Foreclosure property sales reported in the Multiple Listing Service (MLS) increased 9.2 percent year-over-year in November. Foreclosures comprised 20.2 percent of all property sales, which is consistent with the levels they have maintained since May of this year. The median price of foreclosures in October ticked up 0.8 percent to $80,000.

November sales of all property types in Houston totaled 4,676, up 10.6 percent compared to November 2010. Total dollar volume for properties sold during the month rose 4.4 percent to $942 million versus $903 million one year earlier.

The month of November brought Houston's overall housing market positive results when all sales categories are compared to November of 2010. Total property sales and total dollar volume rose on a year-over-year basis. The median price climbed to an historic high for a November in Houston. Although the average price declined, it recorded its second highest level for a November in Houston.

Month-end pending sales for November totaled 3,013. That is up 16.6 percent from last year and suggests another positive month of sales when the December figures are tallied. The number of available properties, or active listings, at the end of November declined 13.0 percent from November 2010 to 45,113. The inventory of single-family homes dropped to its lowest level since January 2010—6.2 months, compared to 7.6 months one year earlier. That means it would take 6.2 months to sell all the single-family homes on the market based on sales activity over the past year. The figure is significantly better than the national inventory of single-family homes of 8.0 months reported by the National Association of REALTORS® (NAR). These indicators all continue to reflect a balanced real estate marketplace for Houston.

November sales of single-family homes in Houston totaled 3,973, up 11.4 percent from November 2010. This marks the sixth consecutive increase of the year. On a year-to-date basis, sales are ahead 4.1 percent.

At $206,969, the average price of single-family homes declined 4.8 percent compared to last November. It nonetheless achieved the second highest pricing level for a November in Houston. The depreciation resulted from the lower volume of luxury home sales. At $154,950, the median sales price for single-family homes reached a November high, rising 2.6 percent year-over-year, its biggest increase since February 2011. The national single-family median price reported by NAR is $161,600, illustrating the continued higher value and lower cost of living available to consumers in Houston. 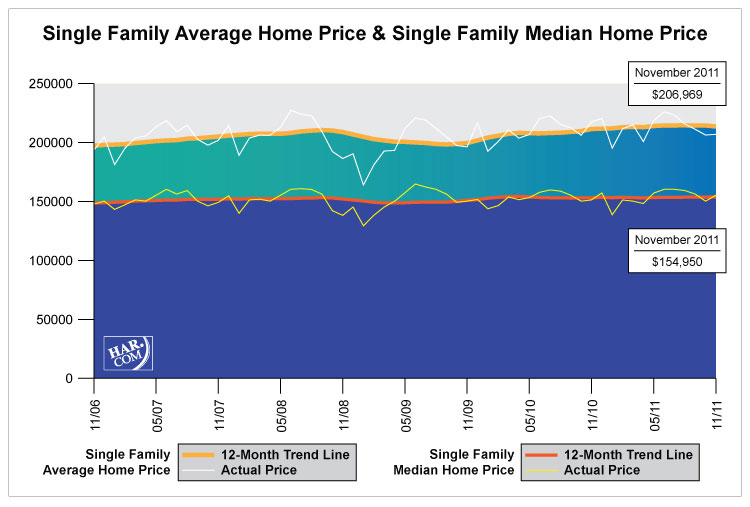 HAR also breaks out the sales performance of existing single-family homes throughout the Houston market. In November 2011, existing home sales totaled 3,224, a 12.8 percent increase from November 2010. The average sales price declined 6.3 percent from last year to $194,008 and the median sales price edged up 1.5 percent to $139,000.

The number of townhouses and condominiums that sold in November rose 1.6 percent compared to one year earlier, marking the fifth straight monthly sales increase. In the greater Houston area, 322 units were sold last month versus 317 properties in November 2010. The average price climbed 8.4 percent to $172,658 from November 2010 to November 2011.

The median price of a townhouse/condominium rose 10.2 percent to $135,000. Both average and median prices were the highest ever for a November in Houston.

Heightened demand for Houston lease properties persisted in November. Single-family home rentals rose 13.5 percent compared to one year earlier and year-over-year townhouse/condominium rentals climbed 4.1 percent. HAR has reported throughout much of 2011 that this demand has been largely driven by hiring gains that have drawn consumers to Houston from around the country. These consumers may not be ready or able to purchase a home for various reasons, among them more stringent mortgage lending requirements.