THE HOUSTON REAL ESTATE MARKET KICKS OFF 2015 WITH GUSTO

HOUSTON — (February 11, 2015) — The Houston real estate market began 2015 much as it ended 2014 – with home sales and prices on the rise and housing inventory at historically low levels. The majority of January sales took place among homes priced between $250,000 and $500,000, with the pace of sales slowing significantly among homes priced above $500,000.

According to the latest monthly report prepared by the Houston Association of Realtors (HAR), single-family home sales totaled 4,032 units, an increase of 2.6 percent compared to January 2014. Months of inventory, the estimated time it would take to deplete the current active housing inventory based on the previous 12 months of sales, held steady at a 2.6-months supply versus last January. That is markedly lower than the current national supply of 4.4 months of inventory.

Home prices achieved record highs for a January. The average price of a single-family home jumped 7.3 percent year-over-year to $259,969. The median price—the figure at which half the homes sold for more and half for less—rose 7.3 percent to $190,000.

“January was a strong month overall for the Houston housing market, but we still expect to see sales cool as a result of lower oil prices and the limited supply of homes,” said HAR Chair Nancy Furst with Berkshire Hathaway HomeServices Anderson Properties. “We’ve already started to see declining townhome and condominium sales. Coming off a record year, this normalization should give homebuilders an opportunity to create new inventory, with existing homes entering the market in the spring and summer months, which is traditionally the most popular time for owners to sell.”

Month-end pending sales for all property types totaled 3,382. That is down 9.3 percent compared to last year and portends slower sales activity when the February numbers are tallied. Active listings, or the number of available properties, at the end of January was 26,556, down 5.9 percent from last year.

Houston’s housing inventory was unchanged in January, matching the 2.6-months supply of a year earlier. According to the National Association of Realtors, the current supply of homes for the U.S stands at a 4.4-months supply. 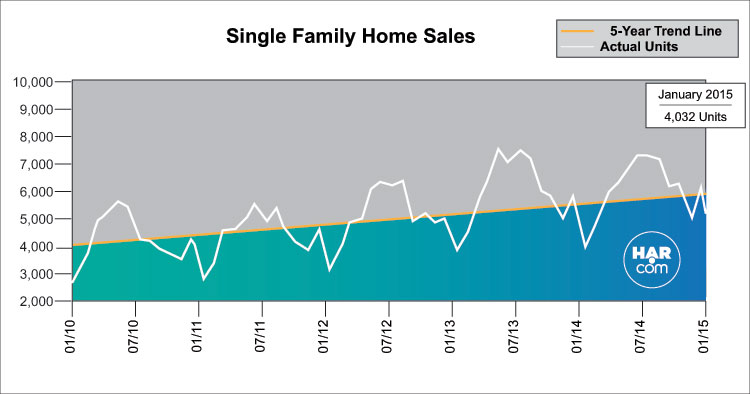 Home prices reached record highs for a January in Houston. The single-family average price increased 7.3 percent from last year to $259,969 and the median price climbed 7.3 percent year-over-year to $190,000. The number of days it took a home to sell, or Days on Market, was 57 versus 65 last January. In July 2014, it fell to an historic low of 45 days. 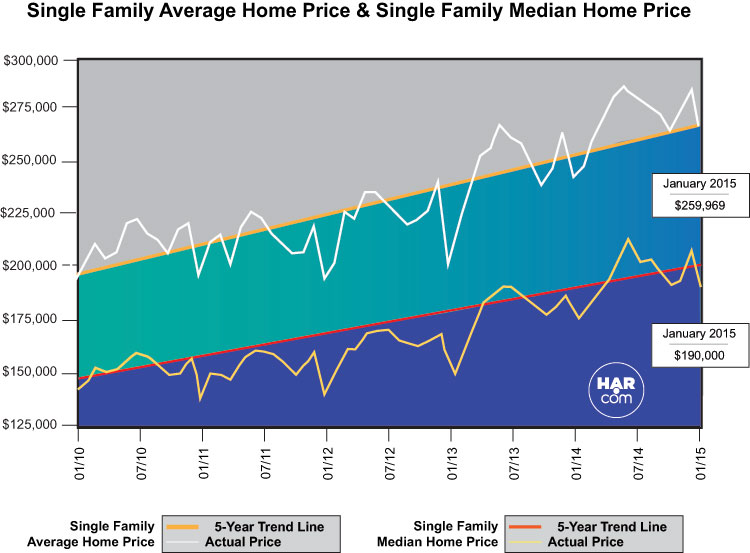 HAR also breaks out the sales figures for existing single-family homes. In January, existing home sales totaled 3,454. That is up 3.8 percent from the same month last year. The average sales price climbed 8.1 percent year-over-year to $242,220 while the median sales price rose 7.4 percent to $175,000.

Demand for lease properties was down in January. Single-family home rentals dipped 2.1 percent compared to January 2014, while year-over-year townhouse/condominium rentals fell 7.2 percent. The average rent for a single-family home was up 3.0 percent to $1,665 and the average rent for a townhouse/condominium rose 2.7 percent to $1,547.

Houston Real Estate Milestones in January
The computerized Multiple Listing Service of the Houston Association of REALTORS® includes residential properties and new homes listed by 29,000 REALTORS® throughout Harris, Fort Bend and Montgomery counties, as well as parts of Brazoria, Galveston, Waller and Wharton counties. Residential home sales statistics as well as listing information for more than 50,000 properties may be found on the Internet at https://www.har.com.