HOUSTON HOME SALES SHOW NO SIGN OF LET-UP IN SEPTEMBER

HOUSTON — (October 8, 2014) — The fall home buying season began with gusto in Houston as sales and prices did in September what they have done for months – rose. The continued buying frenzy caused housing inventory to shrink very slightly after holding steady for two consecutive months. And in another scenario that has become all too familiar in this market, prices reached record one-month highs.

According to the latest monthly report prepared by the Houston Association of Realtors (HAR), single-family home sales totaled 6,490 units, an increase of 7.0 percent compared to September 2013. Months of inventory, an estimate of the time required to deplete the current active housing inventory based on the previous 12 months of sales activity, dipped to a 2.9-months supply from a 3.2-months supply last September. It remains well below the current national supply of 5.5 months of inventory.

“As long as consumers continue to snap up homes at the current pace, replenishing our housing inventory will be a slow process,” said HAR Chair Chaille Ralph with Heritage Texas Properties. “Rental numbers were strong in September, suggesting that many would-be home buyers are continuing to go the lease route until the market bears the homes they’re looking for at the price point that suits them.”

The Houston housing market experienced across-the-board gains in September, with total property sales, total dollar volume and average and median pricing all up when compared to September 2013.

Month-end pending sales for all property types totaled 4,143. That is up 17.2 percent compared to last year and is considered a bellwether of continued positive sales activity next month. Active listings, or the number of available properties, at the end of September was 28,946 and is 10.8 percent below last year.

Houston’s housing inventory, after holding steady at a 3.0-months supply in July and August, shrank in September to a 2.9-months supply versus 3.2 months a year earlier. That compares to a 5.5-months supply of inventory across the U.S. recently reported by the National Association of Realtors.

Home prices reached record highs for a September in Houston. The single-family average price increased 8.2 percent from last year to $269,440 and the median price climbed 7.7 percent year-over-year to $196,000. Transactions continued to close at a near-record pace. The number of days a home took to sell¬, or Days on Market, was 47. In July it reached a record low of 45 days. 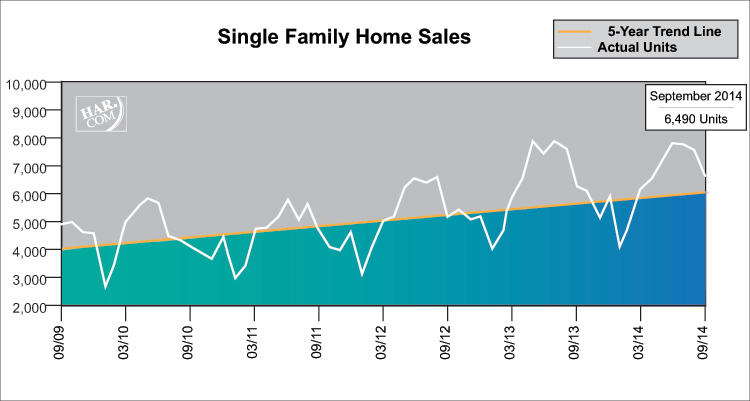 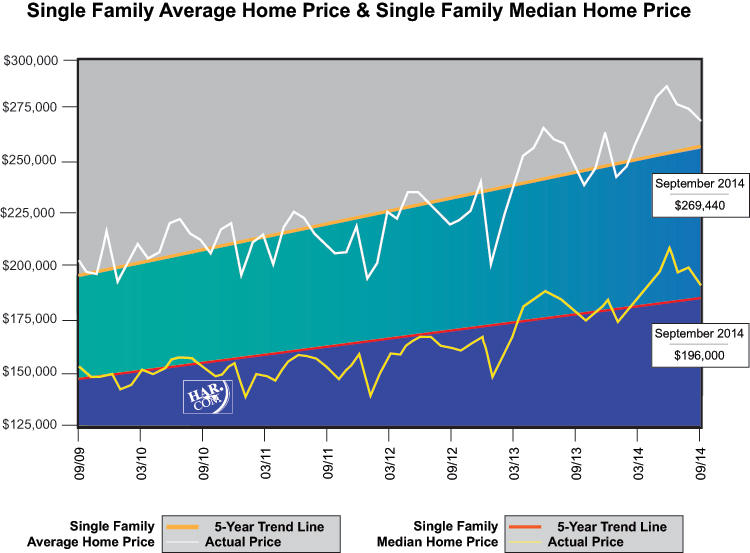 HAR also breaks out the sales figures for existing single-family homes. In September, existing home sales totaled 5,715. That is up 10.2 percent from the same month last year. The average sales price increased 6.8 percent year-over-year to $250,966 while the median sales price jumped 7.5 percent to $182,800.

After two months of declines, sales of townhouses and condominiums rose 7.4 percent in September versus one year earlier. A total of 625 units sold last month compared to 582 properties in September 2013. The average price increased 7.5 percent to $195,064 and the median price shot up 10.7 percent to $150,500. Inventory reached to a 2.5-months supply versus a 3.1-months supply a year earlier.

Lease properties showed strong demand in September as inventory of for-sale properties remained tight. Single-family home rentals soared 13.2 percent compared to September 2013, while year-over-year townhouse/condominium rentals increased 8.8 percent. The average rent for a single-family home was up 2.7 percent to $1,749 and the average rent for a townhouse/condominium was flat at $1,533.

Houston Real Estate Milestones in September
The computerized Multiple Listing Service of the Houston Association of REALTORS® includes residential properties and new homes listed by 29,000 REALTORS® throughout Harris, Fort Bend and Montgomery counties, as well as parts of Brazoria, Galveston, Waller and Wharton counties. Residential home sales statistics as well as listing information for more than 50,000 properties may be found on the Internet at https://www.har.com.