HOUSTON — (September 21, 2012) — August marked the 15th consecutive month of positive home sales across the greater Houston area, with single-family homes selling at the greatest one-month volume since August 2007. Buyers gobbled up enough properties to drive inventory down to a level last seen more than 10 years ago.

According to the latest monthly data prepared by the Houston Association of REALTORS® (HAR), single-family home sales jumped 20.0 percent compared to August 2011. Contracts closed on 6,600 homes in August, sending inventory falling to 4.9 months.

"August rounds out an extremely prosperous summer for the Houston real estate market," said Wayne A. Stroman, HAR chairman and CEO of Stroman Realty. "As we saw in July, homes sold well in every pricing category, but particularly the higher end, which contributed to another boost in home prices. Further growth in local employment and low interest rates continue to make Houston attractive to home buyers."

Foreclosure property sales reported in the Multiple Listing Service (MLS) declined 4.2 percent compared to August 2011. Foreclosures made up 16.8 percent of all property sales, which is consistent with levels observed over the past few months. The median price of August foreclosures was flat at $80,000.

August sales of all property types in Houston totaled 7,814, a 20.5 percent increase compared to August 2011. Total dollar volume for properties sold during the month leapt 26.3 percent to $1.7 billion versus $1.3 billion a year earlier.

Month-end pending sales for August totaled 4,298. That is up 8.3 percent from last year and suggests the likelihood of another positive sales month when the September real estate transactions are totaled. Active listings, or the number of available properties, at the end of August declined 16.9 percent from August 2011 to 40,504.

For the first time in more than 10 years, the inventory of single-family homes fell below five months, dropping from 7.1 months a year ago to 4.9 months, a level the Houston market last observed in April 2002. Housing inventory has remained below a six-month supply since December 2011. For perspective, the national inventory of single-family homes is 6.4 months, according to the National Association of REALTORS® (NAR). A supply of less than six months is traditionally defined as a "seller's market," however buyers have been reaping the benefits of historically low mortgage interest rates.
* Months inventory estimates the number of months it will take to deplete current active inventory based on the prior 12 months sales activity. This figure is representative of the single-family homes market.

August sales of single-family homes in Houston totaled 6,600, up 20.0 percent from August 2011. That marks the 15th straight monthly increase and represents the largest one-month jump in single-family home sales since August 2007. 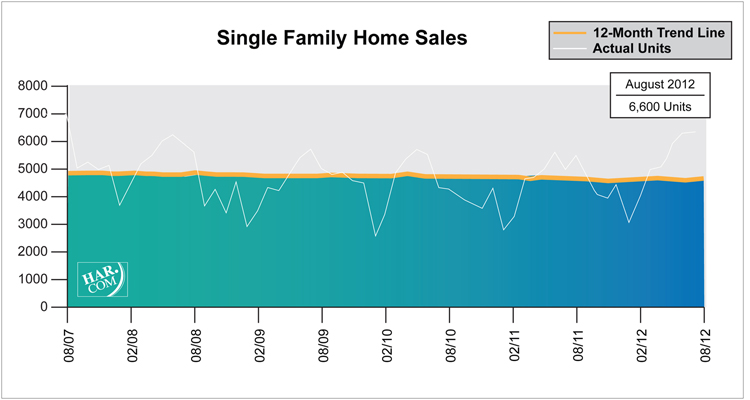 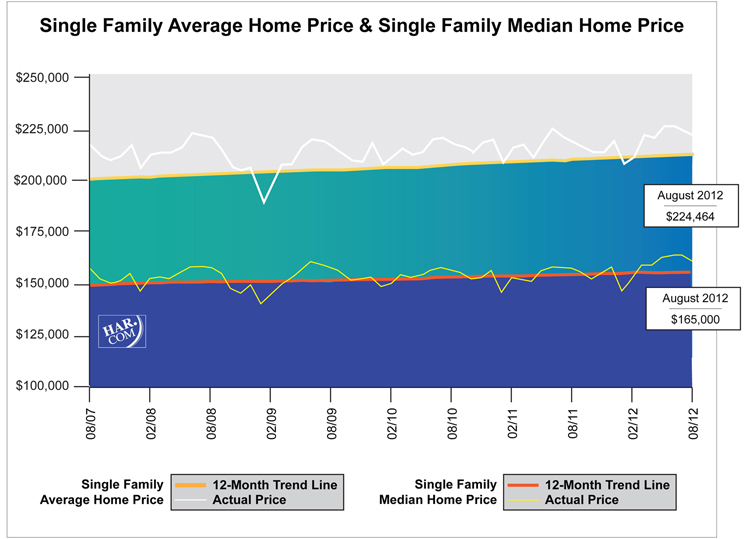 The average price of a single-family home rose 4.0 percent from last August to $224,464, the highest level for an August in Houston. The highest and second highest average prices of all time were recorded in May and June of this year, respectively. At $165,000, the median sales price for single-family homes also achieved a record high for an August in Houston, increasing 3.8 percent year-over-year.