Single-family home sales soared 27.0 percent compared to July 2011, according to the latest monthly data prepared by the Houston Association of REALTORS® (HAR). The robust sales activity is keeping local housing inventory at its lowest level in more than five years.

"July was another very healthy month for the Houston real estate market with strong sales across all housing segments, from lower-priced homes to luxury homes," said Wayne A. Stroman, HAR chairman and CEO of Stroman Realty. "Sales volume isn't achieving the record levels we experienced in 2006, before the recession, but you'd be hard-pressed to find a market performing as well as Houston, even as the national housing recovery continues. Houston's steady employment growth remains a key driver."

Both average and median prices were up in July. The single-family home average price increased 3.7 percent year-over-year to $231,484, the highest level for a July in Houston and the third highest price of all time. The median price—the figure at which half of the homes sold for more and half sold for less—rose 6.3 percent to $170,000, matching June's revised record high (originally reported as $171,000).

Foreclosure property sales reported in the Multiple Listing Service (MLS) were flat compared to July 2011. Foreclosures comprised 16.3 percent of all property sales, a share that has continued to slide since the 27.8 percent level high recorded in January. The median price of July foreclosures declined 4.5 percent to $80,199.

July sales of all property types in Houston totaled 7,363, a 24.6 percent increase compared to July 2011. Total dollar volume for properties sold during the month rocketed 29.9 percent to $1.6 billion versus $1.3 billion a year earlier.

Month-end pending sales for July totaled 4,079. That is up 11.5 percent from last year and indicates the likelihood of another month of positive sales when the August real estate transactions are totaled. Active listings, or the number of available properties, at the end of July declined 16.3 percent from July 2011 to 41,860.

After holding at 5.5 months through May and June, the inventory of single-family homes dipped to 5.3 months in July, which is the lowest level the Houston market has observed since February 2007. In July 2011, inventory was 7.6 months. It has remained below a six-month supply since December 2011. The 5.3-month figure compares favorably to the national inventory of single-family homes of 6.6 months recently reported by the National Association of REALTORS® (NAR).
* Months inventory estimates the number of months it will take to deplete current active inventory based on the prior 12 months sales activity. This figure is representative of the single-family homes market.

July sales of single-family homes in Houston totaled 6,324, up 27.0 percent from June 2011. That marks the 14th straight monthly increase and represents the largest one-month jump in single-family home sales since August 2011. 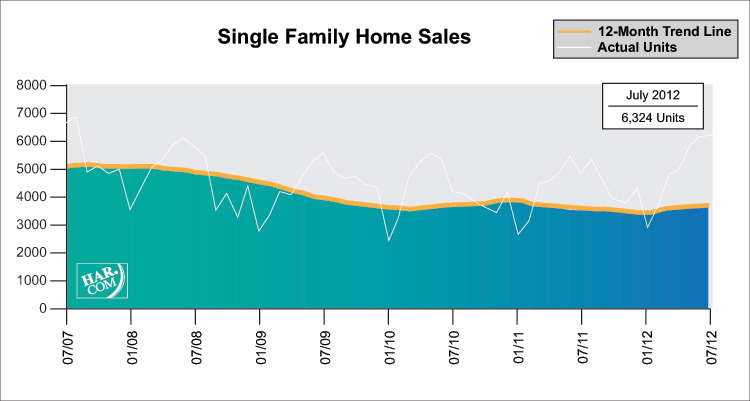 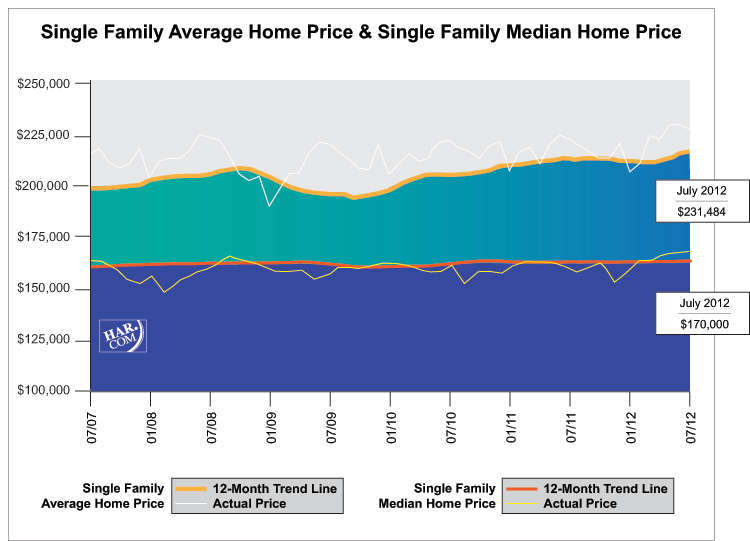 The average price of a single-family home rose 3.7 percent from last July to $231,484, the highest level for a July in Houston and the third highest price of all time. The highest and second highest average prices were recorded in June and May of this year, respectively. At $170,000, the median sales price for single-family homes increased 6.3 percent year-over-year, matching the record high achieved in June 2012, which has been revised from the $171,000 initially reported.