According to the latest monthly report prepared by the Houston Association of REALTORS®, home sales climbed 13.5 percent year-over-year, with contracts closing on 6,020 single-family homes. That is the lowest one-month sales volume since March.

The median price of a single-family home—the figure at which half the homes sold for more and half for less—rose 8.9 percent to $177,500. The average price increased 7.9 percent year-over-year to $239,773. Both figures represent the highest prices for an October in Houston.

October brought gains to all housing segments except the under-$80,000 market. Homes selling from $150,000 through $500,000 scored the greatest increase in sales volume.

“Home sales have shown no sign of letting up, which illustrates the strength of the Houston economy and its continued job growth,” said HAR Chairman Danny Frank with Coldwell Banker, United REALTORS®. “Unfortunately, the home buying frenzy has also sparked a recent wave of scams in which for-sale properties are falsely advertised in online listings as rentals with scam artists trying to take advantage of unsuspecting consumers. HAR urges consumers to always work with a REALTOR® and remember that a deal that sounds too good to be true most likely is too good to be true.”

Foreclosure property sales reported in the HAR Multiple Listing Service (MLS) fell 46.9 percent compared to October 2012. Foreclosures currently make up just 7.5 percent of all property sales, down from 19.6 percent at the beginning of the year. The median price of foreclosures edged up 0.9 percent to $85,706.

Houston’s real estate market experienced gains in all categories in October when comparing sales to October 2012. Total property sales, total dollar volume and average and median pricing all rose on a year-over-year basis,

Month-end pending sales totaled 3,995, a 3.7 percent gain over last year and a strong indicator of another month of positive sales when the November numbers are tallied. Active listings, or the number of available properties, at the end of October dropped 16.5 percent to 31,638.

Houston’s inventory of available homes dipped from 3.2 months in September to 3.1 months in October, down from 4.4 months of inventory one year ago. The inventory of single-family homes across the United States currently stands at 5.0 months, according to the latest report from the National Association of REALTORS® (NAR).

October sales of single-family homes in Houston totaled 6,020, up 13.5 percent from October 2012. That marks the 29th consecutive monthly increase.

Home prices reached the highest levels ever recorded in Houston for an October. The single-family median price rose 8.9 percent from last year to $177,500 and the average price climbed 7.9 percent year-over-year to $239,773. 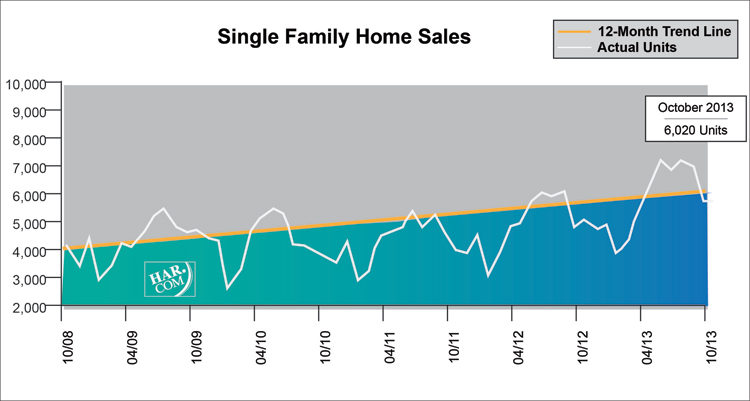 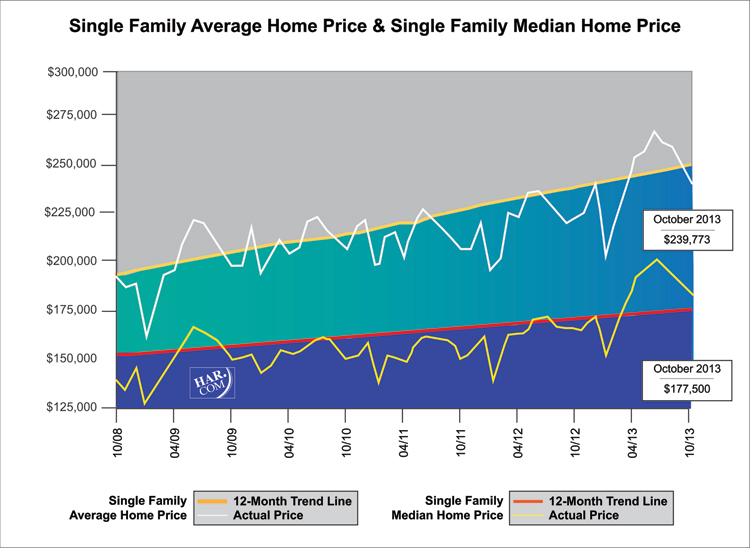 HAR also breaks out the sales performance of existing single-family homes throughout the Houston market. In October 2013, existing home sales totaled 5,160, a 16.2 percent increase from the same month last year. The average sales price rose 6.8 percent year-over-year to $223,446 while the median sales price rose 10.3 percent to $165,500.

Houston’s lease property market showed further growth in October. Rentals of single-family homes rose 9.4 percent compared to October 2012 while year-over-year townhouse/condominium rentals increased 3.2 percent. Average rents retreated slightly from their recent record highs, although they are up year-over-year. The average rent for a single-family home rose 5.4 percent to $1,647 while the average rent for a townhouse/condominium increased 5.2 percent to $1,463.

Houston Real Estate Milestones in October
The computerized Multiple Listing Service of the Houston Association of REALTORS® includes residential properties and new homes listed by REALTORS® throughout Harris, Fort Bend and Montgomery counties, as well as parts of Brazoria, Galveston, Waller and Wharton counties. Residential home sales statistics as well as listing information for more than 50,000 properties may be found on the Internet at https://www.har.com.