MLS Report for December and Full-Year 2017

HOUSTON — (January 10, 2018) — Despite the devastating assault that Hurricane Harvey waged on the greater Houston area last summer – from which many property owners are still recovering – the Houston real estate market set new records by the time the sun set on 2017. Single-family home sales for the full year rose 3.5 percent compared to 2016, the previous record year. However, as 2018 gets underway, the supply of housing remains constrained. Inventory had begun to reach more balanced levels when Harvey’s widespread flooding sent affected residents scrambling for whatever undamaged rental and sales homes were available to provide safe shelter for themselves and their families.

"No one could ever have imagined 2017 turning out to be a record-setting year for the Houston real estate market, which had weathered the effects of the energy slump only to have Harvey strike such a devastating blow,” said HAR Chair Kenya Burrell-VanWormer with JP Morgan Chase. “We know that many are still working tirelessly to rebuild their lives after Harvey, but overall, this clearly illustrates the incredible resilience of the people and the economy of Houston, Texas. We also know that some neighborhoods are performing better than others, so it’s always advisable to consult a Realtor when thinking about buying or selling a home."

The single-family home median price (the figure at which half of the homes sold for more and half sold for less) rose 1.7 percent to $230,000. That marks the highest median price ever for a December. The average price declined 0.6 percent to $292,174.

As 2017 began, the high end of the Houston real estate market was showing welcomed signs of recovery from the effects of the weakened energy sector, and inventory levels in all housing categories finally began to rise. Strong employment numbers translated to an influx of home buyers and renters to the Houston area from across the country and around the world. However, Harvey’s late August rampage interrupted hiring and forced those whose homes and apartments were damaged or destroyed to seek immediate housing anywhere they could, causing inventory to shrink.

Fortunately, the setbacks resulting from this historic weather catastrophe were much shorter-lived than anticipated. By the end of September – just four weeks after Harvey hit – the “Houston Strong” housing market saw home sales rebound and the greatest rental activity of all time. The positive momentum continued through the final months of 2017.

Month-end pending sales for single-family homes totaled 5,413, an increase of 24.0 percent versus 2016. Total active listings, or the total number of available properties, declined 2.2 percent from December 2016 to 33,432. 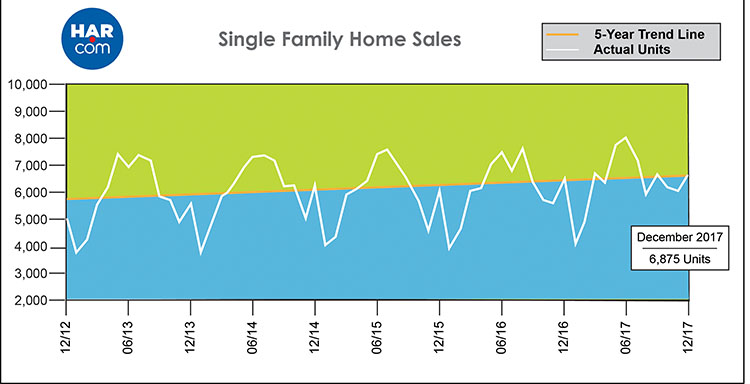 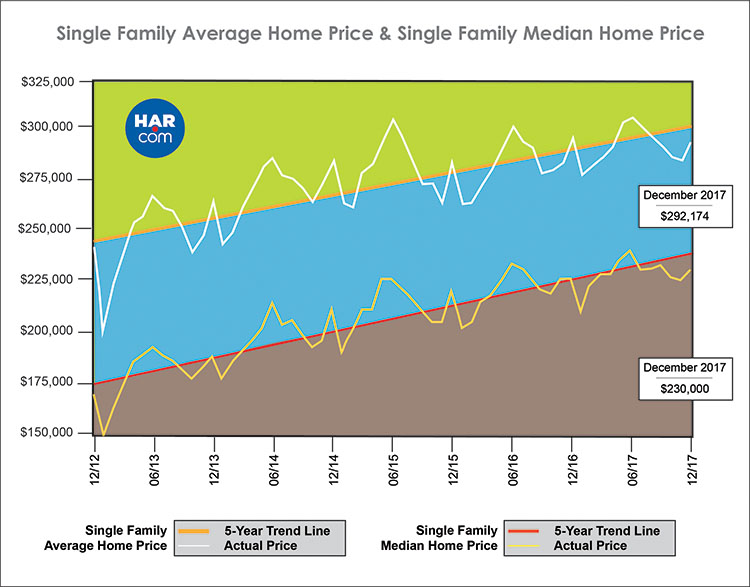 HAR also breaks out the sales figures for existing single-family homes. Existing home sales totaled 5,460 in December, up 3.7 percent versus the same month last year. The average sales price rose 2.6 percent to $276,738 while the median sales price increased 1.2 percent to $211,000. 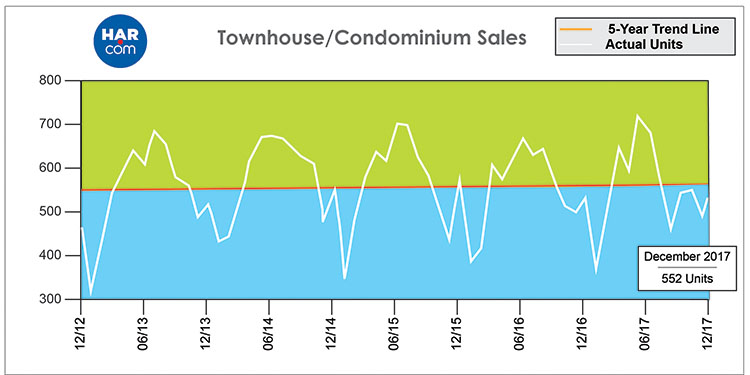 Houston Real Estate Highlights for December and Full-Year 2017
The computerized Multiple Listing Service of the Houston Association of REALTORS® includes residential properties and new homes listed by 37,000 REALTORS® throughout Harris, Fort Bend and Montgomery counties, as well as parts of Brazoria, Galveston, Waller and Wharton counties. Residential home sales statistics as well as listing information for more than 50,000 properties may be found on the Internet at https://www.har.com.

Founded in 1918, the Houston Association of REALTORS® (HAR) is a 37,000-member organization of real estate professionals engaged in every aspect of the industry, including residential and commercial sales and leasing, appraisal, property management and counseling. It is the largest individual dues-paying membership trade association in Houston as well as the second largest local association/board of REALTORS® in the United States.