ALONG WITH TEMPERATURES, HOME SALES AND PRICES REMAIN HOT IN JULY

HOUSTON — (August 12, 2015) — The mercury wasn’t the only thing on the rise in Houston in July. For a second straight month, home sales and prices surpassed last year’s record-breaking pace, while housing inventory levels showed further improvement. Homes priced below $150,000 experienced a sales decline, while those above $500,000 showed particularly strong sales volume.

July single-family home sales totaled 8,147 units-the highest one––month volume ever–– compared to 7,637 a year earlier, according to the latest monthly report prepared by the Houston Association of Realtors (HAR). The time it took to sell the average home matched last year’s 45 days.

Home prices achieved July highs, with the average price of a single-family home up 6.3 percent year-over-year to $293,790. The median price—the figure at which half the homes sold for more and half for less—rose 8.6 percent to $220,000.

July sales of all property types amounted to a record-setting 9,653 units, an increase of 6.0 percent versus the same month last year. Total dollar volume rose 9.5 percent to $2.7 billion.

"The Houston housing market has been blessed with another solid month of gains,” said HAR Chair Nancy Furst with Berkshire Hathaway HomeServices Anderson Properties. “Despite lingering concerns about falling oil prices and layoffs within the energy industry, I believe the strength of Houston’s housing market continues to be buoyed by our tremendously diverse local economy."

The Houston housing market benefitted from across-the-board gains in the July 2015 versus July 2014 analysis, with single-family home sales, total property sales, and total dollar volume all up, and prices reaching record highs for a July.

Month-end pending sales for single-family homes totaled 7,959, a 4.1 percent increase compared to a year earlier. Active listings, or the number of available properties, at the end of July rose 12.7 percent to 33,679.

Houston’s housing inventory saw a notable expansion in July, reaching a 3.4-months supply versus the 3.0-months supply of one year earlier. That matches the inventory level recorded in July 2013, but remains below the current national supply of homes which stands at a 5.0-months supply, according to the National Association of Realtors (NAR). 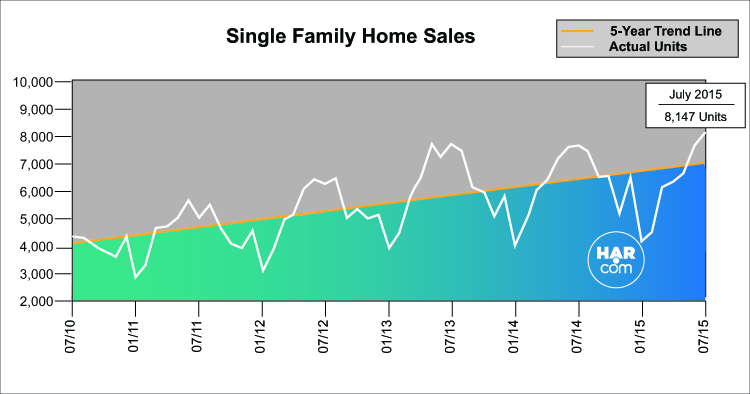 Single-family home sales totaled 8,147 in July, an increase of 6.7 percent from July 2014. Home prices reached the highest levels ever for a July in Houston. The single-family average price rose 6.3 percent from last year to $293,790 and the median price jumped 8.6 percent year-over-year to $220,000. The average number of days it took to sell a home, or Days on Market (DOM), was 45 in July, matching the DOM of a year earlier.

Single-family home sales tracked on a year-to-date basis were flat in July at 43,559. 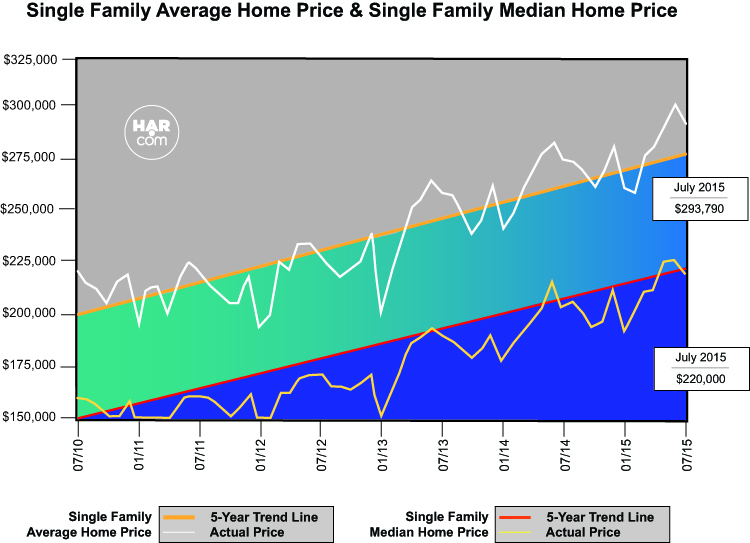 HAR also breaks out the sales figures for existing single-family homes. Existing home sales totaled 7,133 in July. That is a 6.6 percent increase over the same month last year. The average sales price rose 5.2 percent year-over-year to $276,094 while the median sales price jumped 7.9 percent to $205,000.

Houston Real Estate Milestones in July
The computerized Multiple Listing Service of the Houston Association of REALTORS® includes residential properties and new homes listed by 29,000 REALTORS® throughout Harris, Fort Bend and Montgomery counties, as well as parts of Brazoria, Galveston, Waller and Wharton counties. Residential home sales statistics as well as listing information for more than 50,000 properties may be found on the Internet at https://www.har.com.