According to the latest monthly report prepared by the Houston Association of REALTORS® (HAR), home sales climbed 16.2 percent year-over-year, with contracts closing on 7,504 single-family homes. Monthly home sales volume has topped the 7,000 mark for four straight months, matching levels last seen in the spring of 2007.

The median price of a single-family home—the figure at which half the homes sold for more and half for less—rose 12.8 percent to $186,200. The average price increased 16.4 percent year-over-year to $260,607. Both figures represent the highest prices ever seen in an August in Houston.

August brought gains to all housing segments except the under-$80,000 market. Homes selling from $250,000 through the millions registered the greatest increase in sales volume.

“This has definitely been a summer sales season unlike any we have seen before,” said HAR Chairman Danny Frank with Prudential Anderson Properties. “Our small bump in inventory in July was short-lived as consumers bought faster than homeowners sold in August. It’s difficult to say exactly when Houston’s boiling real estate market will begin to cool down.”

Foreclosure property sales reported in the HAR Multiple Listing Service (MLS) dropped 47.0 percent compared to August 2012. Foreclosures currently make up just 7.7 percent of all property sales, down from 19.6 percent at the beginning of the year. The median price of foreclosures jumped 12.6 percent to $90,055.

August sales of all property types in totaled 8,908, a 16.4 percent increase over the same month last year. Total dollar volume for properties sold shot up 35.6 percent to $2.2 billion versus $1.6 billion a year earlier.

Houston’s real estate market enjoyed positive indicators across the board in August when comparing sales to August 2012. On a year-over-year basis, total property sales, total dollar volume and average and median pricing all increased.

Month-end pending sales totaled 4,363, a 1.5 percent gain over last year and a smaller increase than the market has experienced in many months. While that ordinarily might suggest a tapering in sales activity in the subsequent month, it is most likely symptomatic of homes selling so quickly that they never attain “pending” status. Active listings, or the number of available properties, at the end of August declined 18.9 percent to 32,834.

Houston’s inventory of available homes dipped from 3.4 months in July to 3.3 months in July, down from the year-ago level of 4.9 months of inventory. The inventory of single-family homes across the United States currently stands at 5.1 months, according to the latest report from the National Association of REALTORSâ (NAR).

August sales of single-family homes in Houston totaled 7,504, up 16.2 percent from August 2012. That marks the 27th consecutive monthly increase.

Home prices achieved the highest levels ever recorded in Houston in an August. The single-family median price rose 12.8 percent from last year to $186,200 and the average price climbed 16.4 percent year-over-year to $260,607. 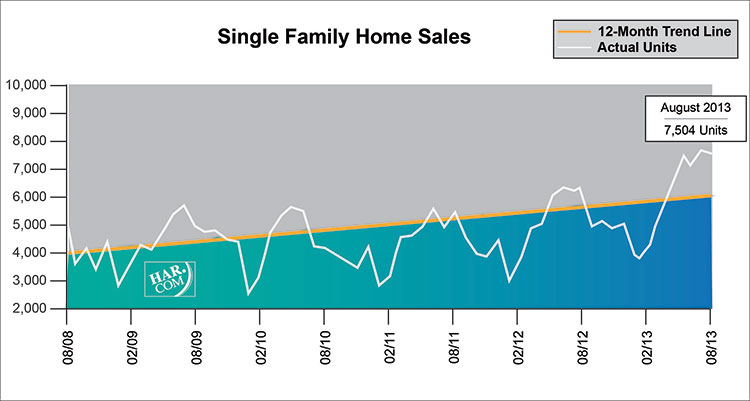 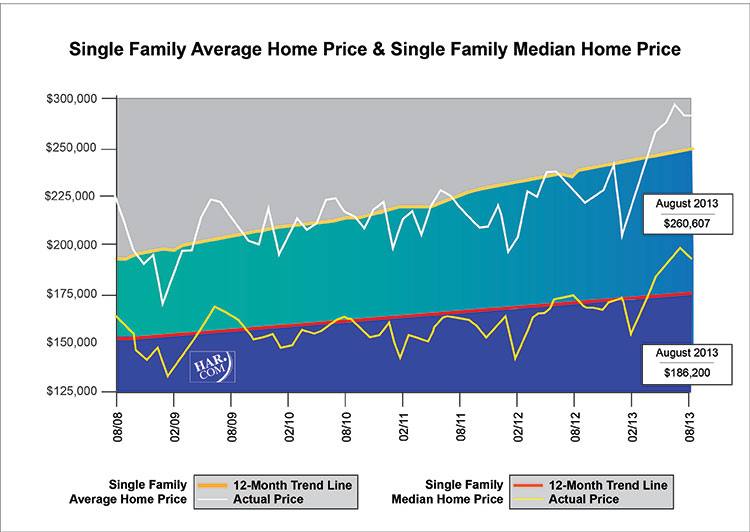 HAR also breaks out the sales performance of existing single-family homes throughout the Houston market. In August 2013, existing home sales totaled 6,679, a 20.8 percent increase from the same month last year. The average sales price rose 16.6 percent year-over-year to $248,720 while the median sales price rose 14.2 percent to $177,000.

Houston’s lease property market remained healthy in August. Rentals of single-family homes rose 10.3 percent compared to August 2012 while year-over-year townhouse/condominium rentals were flat. Rents crept up to record highs with the average monthly lease of a single-family home reaching $1,748 and the average monthly lease for a townhouse/condominium reaching $1,507.

Houston Real Estate Milestones in August
The computerized Multiple Listing Service of the Houston Association of REALTORS® includes residential properties and new homes listed by REALTORS® throughout Harris, Fort Bend and Montgomery counties, as well as parts of Brazoria, Galveston, Waller and Wharton counties. Residential home sales statistics as well as listing information for more than 50,000 properties may be found on the Internet at https://www.har.com.